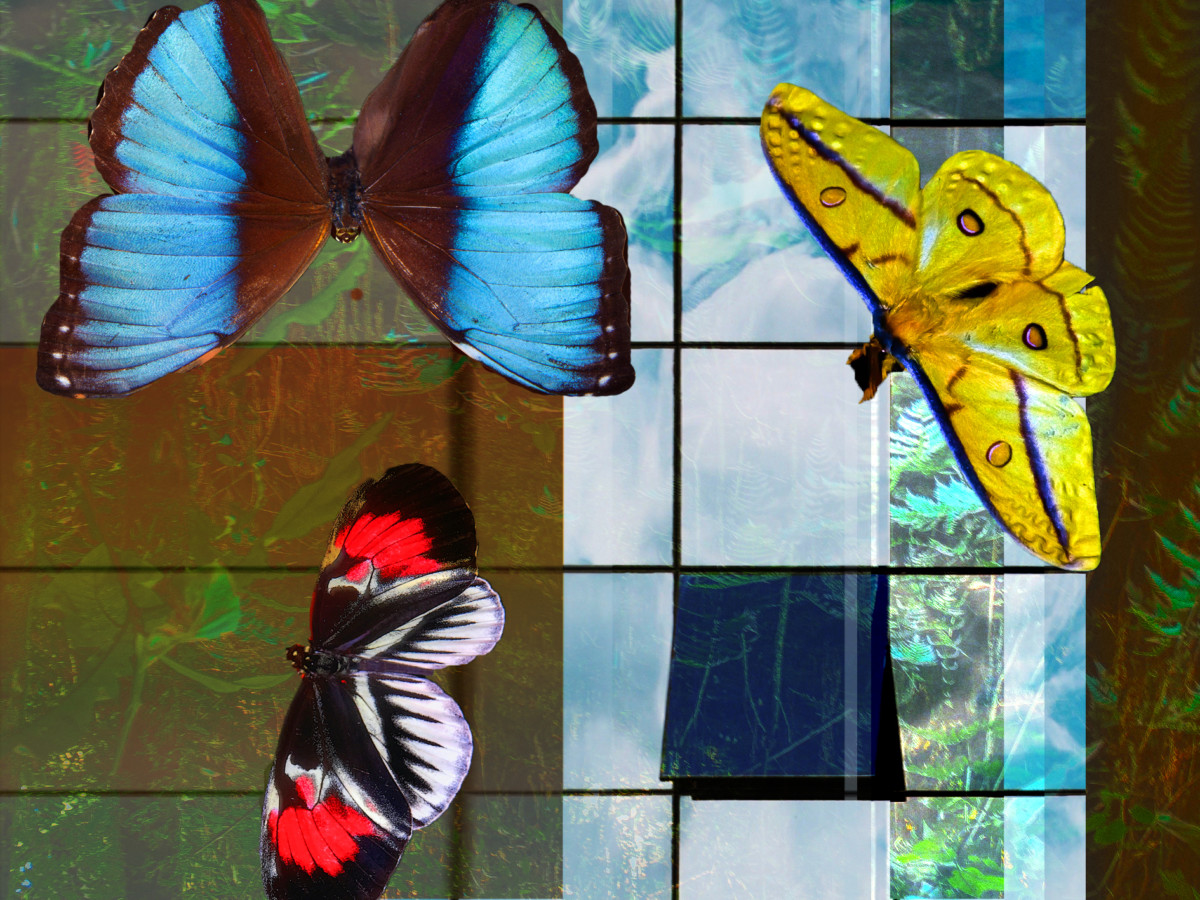 Circumstances Concerning My Preference for the Sister

Yes, I have parked cars for Natalka in Bratislava. In the dry season we all roosted in the high mountains. Paval, who is Ivo’s brother and a little slow, watches me. You can tell the locals from the foreigners by the way the foreigners perch head down on tree trunks and the frequent gathering of moisture from the sap, mud and rotting fruits. We ignore the flowers. Sometimes the locals are entertained by the nighthawks diving for fireflies. Sometimes they bet upon their fate and amass great fortunes.

We produce green spherical eggs, but none of us seems to understand quite how we do this. I have my suspicions. When the children are young, they move like caterpillars and look just as rounded, with black marbling and short, branched spines. Of course they don’t stay like this very long. We teach them to view themselves as naively healthy, light to dark brown with rows of lighter bumps and small black markings. This is so that we do not ourselves appear to be juvenile.

Some of us live in El Salvador upon the nettles of the lower mountains. There’s a place there that seems quite like a little Bratislava, with a charmingly resonant and evocative speech impediment. People from the countries of Over There gather Here. The locals immediately identify their cherished differences from the local versions but cannot separate the differences between each other. Twice a year we struggle with the eggs, especially in the wet season, when we sometimes seem to be taking up all the space. Our facial expressions make other’s spouses uncomfortable. They’re articulate beyond words and live in a land of melodrama right there upon our visages.

We tend to live near parking garages and moist tropical and subtropical forests and seasonal dry forests near the stores that sell things we shouldn’t talk about all the time. We are conflicted about modern urban life. Mexico and most of Central America have become familiar with our straying. Rarely, however, do we enter into South Texas. We’ve learned how to keep the original sun in a very large jar of formaldehyde. That’s his brother you see every morning, the hot-headed one. He’s reliable and distant at the same time. You might want to protect your eyes from his prying. You might not want to let your skin dry out from all the peeking. You might not find his nocturnal girlfriend quite so annoying. She says the same things and acts the same way, but she’s gentle and not all there in a predictable cycle though you never know when she might hide behind less predictable weather.

The Industry of Replacement

On the mountaintops and in the meadows, we hid behind several boxes of mufflers, the neck kind, not the car kind. They wouldn’t be stored in meadows.

There was a door but no house.

We lived mostly on buckwheat and some claimed this caused the males to become iridescent on the top, a violet-blue/lilac, while the females’ tops remained cool slate brown with black spots. The undersides were all ivory, with black spots.

My caution wants to be a hero, but then it wouldn’t be my caution.

How many horizons still offer temptations? How many move further away?

It’s like the way a short man will reach for a taller discussion, and a tall man will linger after the game is over.

It’s true that Yves has a leaf-like shape, and his two tails are black with blue spots on the tips. It’s also true that you have arrived at the hole in your thinking. Or is it the hole that is your thinking? You offer me this annoying perspective. I accept,

but it’s not true that farm animals are not saviors any more than geometrical figures are though they may be found in the stars until daybreak and then the clouds.

It’s true that Yves’ blue-green reflections above were stunning though the mottled gray beneath was merely tropical, and rare in Texas,

but it’s not true that Yves needed a no-fly zone fatter than his arm and an absent rebellion (the way the small blonde hairs simply curl under).

If your cleverness arrives first, then the gunships may begin laughing. If the reasoning falls out, then the threads will be loosened, if tragedy then humor, if mourning, celebrate it.

It’s not true that a square hasn’t decided, but a rectangle has.

Yves, however, will certainly die first, and we all wait for our rewards. No one really knows if there are any. (Perhaps you should take these ideas away from me.)

And if you can still see at a distance, the square appears round, and so does the rectangle, unless it is next to a square, which then appears oblong and indecisive.

Increase the distance and they are the same again.

Unpack the long and triangular forward parts, the pointed ones.

After you save your first family with death, begin another. Life is precious, and there’s never too much salvation, even for the foolish lambs.

Now unpack the ordinary. Replace it with Enrico, who is already asking, How much more water do the trees think they need?

The war begins, and the fat ass separates from his fat ass.

All the males now are iridescent, dull blue-green with black and white margins. Both wings have several thin black broken bands, which give the appearance of checkering, and the females are a dingy gray-brown on top, heavily checkered and scalloped by broken black lines and whitish squares. Medium-sized black ovals dot their outer wings, which will not save them, just inside the black and white margins. They are all banded a dusky light brown and white. They replace themselves three times each season. They haunt the subtropical forest edges, the scrubby open areas.

The damp air is thin and watery, little more than a failure to become coffee.

and the pulse of a butterfly wing opening and closing,

and the little noise the Contessa makes in her throat when fluffing her pillow,

and the neighbor’s goat eating everything in sight including tomorrow.

And then even everything ending might not be true and everything worth only that.

if you’d prefer, I’ll put it all back, but then where are you among the same foolish generals of certainty?

The Bark of Relative Midnight

It must have been the dogs getting even for all those unforgiving leashes and the crunch of tasteless dried food every morning that merely kept them going until the next morning, or worse, the designer delicacies in rich gravy suitable for a potentate but not the kind of dog that has never lived in the wilderness.

What will you do with the leftovers, Conrad, the enduring principles that might be yours or a butterfly’s, beautiful and gone tomorrow?

Rain is the truth, descending as it always does.

Conrad’s tip is extended forward. Behind he is rounded, an iridescent blue above, crossed by bands of black. There are more white spots on the female Conrads, their forward tips dotted with even more white. Below, she is heavily mottled with brown and gray.

Despite what you’re thinking, this, Conrad can assure you, is not heaven but only the garden of a self-righteous military man, the island of intellectual restraint he lived on with his defeated mother where God lay bleeding.

These scattering fragments, then, let them descend like the fog and like the fog slowly rise and disappear, leaving behind a world refreshed and inviting. Don’t you know how necessary you are?

The truth then is tropical and subtropical, a forest of everywhere that somehow seems to slip into South Texas, another country full of misconceptions and clumsy heroes where God is breath. Take him without thought, but later think about what you have replaced him with because anyone’s father might think he holds more back from you than he gives.

Rich Ives has received awards from the National Endowment for the Arts, Artist Trust, Seattle Arts Commission and the Coordinating Council of Literary Magazines for his work in poetry, fiction, editing, publishing, translation and photography. He is the 2009 winner of the Francis Locke Poetry Award from Bitter Oleander and the 2012 winner of the Thin Air Creative Nonfiction Award. His books include Light from a Small Brown Bird (Bitter Oleander Press–poetry), Sharpen (The Newer York—fiction chapbook), The Balloon Containing the Water Containing the Narrative Begins Leaking (What Books–stories) and Tunneling to the Moon (Silenced Press–hybrid).