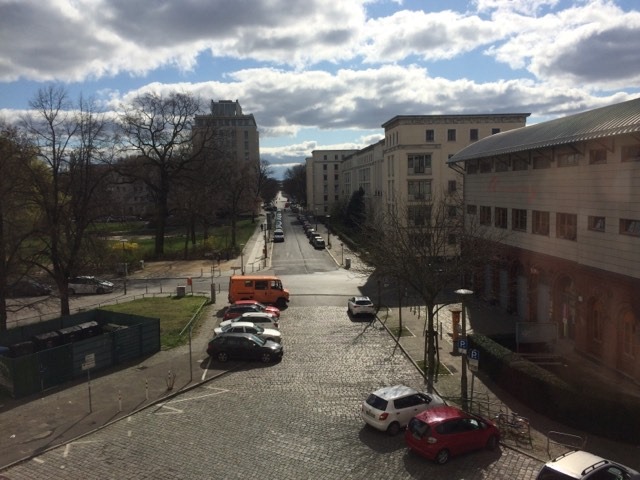 The thing is, for the past two weeks I have been glued to the news, German political talk shows and interviews with virologists, to Spanish newspapers, to reports about methods of containment in China, articles commiserating the exorbitant amount of deaths in Italy and Iran. I have definitely —along with a large percentage of the world population, I suppose— willingly placed myself in the ‘mass brainwashing’ vulnerable zone, if that is indeed what it is, by consuming so much news.

But leaving that unlikely possibility aside, during the past two weeks, my little world went from being super busy at the restaurant where I work, advocating the need to hire more staff to being sent home with a backpack filled with as much food as I could carry because, seeing what was happening in China and Italy, Iran, Spain and now exploding in Germany, the restaurant and the entire country would go on lockdown until further notice. That all happened anyway.

Two weeks ago we even recorded the latest episode of our podcast here in my flat (which is now out and you should most definitely listen to!) and when one of my friends expressed serious concern about the virus because of her asthma condition, I still managed to play it down a bit, thinking, well, we need to protect her, but I will probably be fine. It’s always that ‘I’ isn’t it? And even a week ago I still met up with my girls for our writing group, though at that point we were already just bumping elbows and blowing kisses, avoiding contagion. I think that was when I started to understand the gravity of the situation, not because we could get infected but because we could infect hundreds more without knowing it.

I can’t say I didn’t see it coming in February. I get the little news banners on my phone. I paid attention to the breakout in Wuhan. I read the news about it reaching Europe. But still, what we now know so well as COVID-19 is not Ebola or Avian flu. I mean, at least we had that.

I’m also aware —the fact that people keep reminding me notwithstanding, But you’re a writer, this is great for you— that the #staythefuckhome movement is actually good for me. For anyone familiar with the intricacies of calling oneself a writer, self-isolation is a gift. We artists and writers normally actually pay for this!

So I’m trying. I’m trying to work on my novel. Some days I can, some days I can’t. Some days I go out for a walk, others, I stay home. I talk to my mom and dad in Guatemala, I talk to my brother in California, trying to keep them close to me as much as I psychologically can, I even talk to friends who I haven’t spoken to in years, which is great. But, what with everything that is going on, I am having a bit of a hard time focusing so I can’t say I can read books that efficiently these days, but I’m sure it will come.

I mean my heart goes out to those people, who unlike me are not at all profiting from this situation in some form or other, who, like me, their daily income has been greatly affected, to those who are actually scared and have to go out, and when they do, still face random crowds of people outside, to those who fear for their lives with this virus. I worry about my people, my family, my friends, who I cannot be with, not only because we live on opposite sides of the world but because I could unknowingly infect them. But I guess we’re all in this together in some form or other, and all of us are trying to do what we are being told is best. Are we though?

The thing is, I have this constant whisper inside me, “This virus, it’s so clever, it’s so fucking clever,” it says. And I picture that virus, with it’s little perfect crowns and plump little body and beady little eyes saying, “If the entire world shut down for two weeks, you would eradicate me.” It even snaps its fingers. “Just like that,” it says.

We did it to ourselves, of course, providing a spillover opportunity for it (we’re not even going to get into the self-entitlement that facilitated it), hosting the virus and spreading it at an exponential rate.

What’s most interesting about all this though, are the simple facts: The corona virus isn’t too deadly. It’s a lot more prudent than its cousins. It sits there quietly inside you, reproducing and waiting patiently for you to come into contact with others, then it spreads, but quietly, and even then it sits there, cackling, until it gets bored and makes you ill. Not ill enough for huge concern in a lot of cases, apparently, though it is definitely deadly to a significant portion of the population.

This virus doesn’t care about you or me singularly, we’re peanuts, you and I. It has its beady little eyes on our social fabric instead, on our so-called human solidarity and our dependence on a system that requires us to behave like good little children to work. We have become Frankenstein and COVID-19, our own little monster.

It is indeed not Ebola or Avian flu. The symptoms for those two manifest a lot faster, they are much more visible, a lot deadlier, and therefore maybe a little easier to isolate and contain, primarily because our instinct is to stay away from people who look ill.

So, when I look out my window now, I see an empty street, a park, people walking to and from work. There is no curfew in Germany yet so sometimes, when I go out for a walk, I see random clusters of people, laughing, having a good time and passing a bottle of beer around to share (can you believe it?). Strange isn’t it though? Such a beautiful sight, together, supporting each other, literally standing side by side. Whenever I see this I look around me again, and for a split second I wonder what all the fuss is about. I mean the streets are quiet, peaceful even, and I realize I’m waiting for everything to explode around me. I’m literally waiting for shit to hit the fan.

Once again, the instructions are kindergarten simple, wash your hands, don’t touch your face, try to stay at least a meter and a half away from each other, social distancing, and whenever possible, just stay home. Do this and you may save, not just many, but hundreds of lives. Oh, but being social is so much a part of being human, we can’t help it. Go out for a walk, go out for a bike ride, call your friends up, just try to keep a little distance. If you don’t, more people will die. If this were a novel, I’d say we nailed the stakes, because they are definitely high.

We are not going to shut down the world for two weeks but for the first time ever, everyone in the world will be affected, so we are trying to do the best we can.

So just a little something, to all those people who are still ‘skeptical about shit ever hitting the fan,’ no, the streets are not going to explode in front of us like the first of May celebrations. They are not going to turn into battlefields and end up like Gettysburg. The battles will happen behind hospital walls, in countries where there are enough hospitals. So let me say this as elegantly as I can, “the shit has already hiteth the fan.” It hit the fan a long time ago, with pollution and climate change, with wars and famine and countless other things. It hit the fan again, recently in China, in Iran, in Italy, in Spain and we’ve been consuming it the entire time, watching the wave get closer and closer.

It is very simple, if you like the people you want to be social with, if you have mothers, fathers, siblings, aunts, cousins and friends, if you care, just a little bit, like we constantly say we do, about any of the people we share this planet with, cancel your parties, your group gatherings at the park, your spring break binge-drinking at the beach (and yes this goes to you as well, my fellow Guatemalan compatriots), all of those social things you say you ‘can’t live without’ for a month (trust me, you can). Cancel everything. NOW. Because that little bugger is actually making it very easy for us, considering, and yet, it’s rolling over laughing at our selfishness and asking, “Will you, though?”

Sharon Mertins is a writer based in Berlin. She likes weird stories, dark characters and cryptic endings. Her work has been published in Leopardskin and Limes, Jersey Devil Press, The Wild Word Anthology, Cafe Irreal among others. She is also co-host and producer of the Story Strumpets literary podcast. You can read more of her work on nomadicgraphomania.com

Read her story The Night I Died on Leopardskin and Limes here.