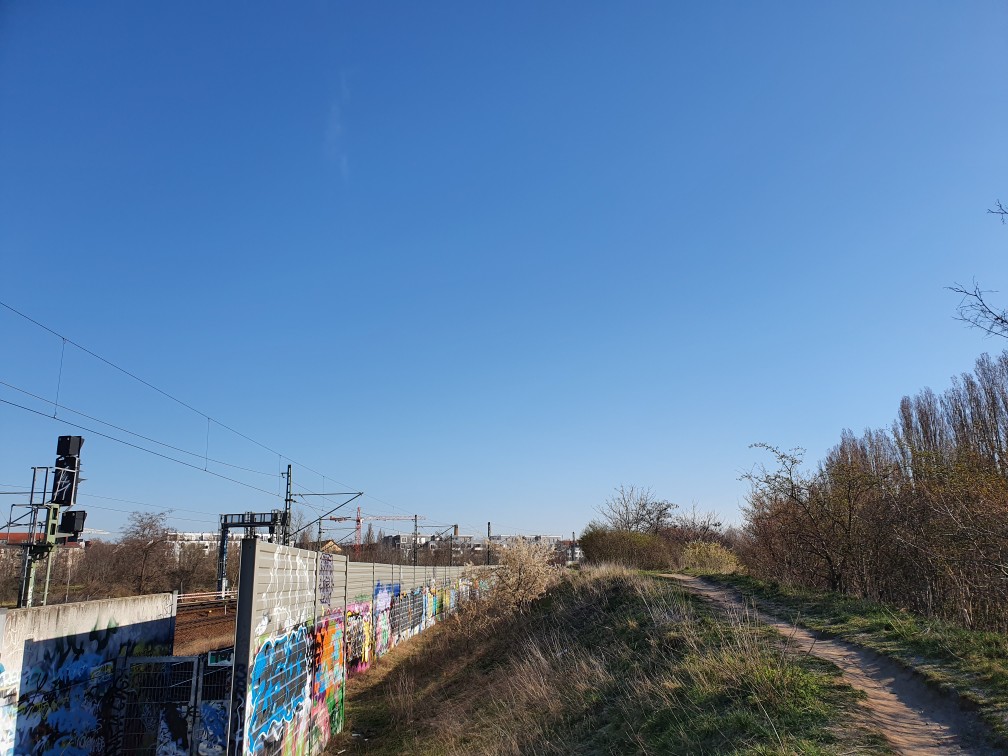 Out in the park, it struck me: not only were there virtually no aircraft in the sky, but the heavens were clear, uncluttered by clouds and not a contrail in sight. For a few seconds, I felt as if I’d been flung back to an earlier time. This is how the skies must have been for most of the human history of this place, even at the dawn of the Holocene, twelve thousand years ago, as the glaciers receded from the shallow valley between Kreuzberg and Prenzlauer Berg, leaving behind a malarial swamp that would eventually become Berlin.

I try to imagine the place now called Mauerpark in the Middle Ages, located on the Barnim plateau of farmland beyond the city walls that ran along what is now Torstrasse. Back then most of the inhabitants of the city worked in the fields around Berlin under pretty atrocious conditions. From morning to night they toiled with harsh overseers watching their every move. You could be fined for taking an unsanctioned break or executed for stealing vegetables. One can only imagine what a labourer thought as he stopped working for a second (hoping his overseer wouldn’t notice) and looked up to the heavens. Was it God, or a lover, or escape?

The ramping down of human activity has brought with it a sudden, jarring sense of place. With commerce at a minimum, noise levels down to tolerable levels, the return to centre stage of birdsong, we’re going through a drastic reduction in human messaging. Of course, the internet is still there, filling our heads with ideas and narratives about the times we’re passing through. There is, nonetheless, a stillness, a cessation of noise that makes it a little easier to listen to our internal voice, observe our moods, but also look at the actual place we inhabit with slightly more presence – if we have the patience to do so.

The city feels less cosmopolitan. The restaurants offering food from around the world are shuttered, the crowds of multilingual tech workers no longer linger outside my corner bar. The sounds of tourism – languages I can’t identify, rolling suitcases – have vanished. In the place of these impressions, the faintest sense of the human settlement that has been here for far longer than the yoga studios and coffee bars emerges. A place that was once home to a virtually forgotten Slavic people and culture, a place colonized about a millennium or so ago by invading Germanic tribes from the West. A city that has been Prussian for most of its history and that would become the centre of the ill-fated German Empire and all the demented social experiments of the 20th century. Unspeakable acts of violence were committed here – on and off – for centuries. And for brief periods, the people bounced back and celebrated with excess, revelry, political and cultural rebellion. All this is adrift in the chilly March wind these days.

The near absence of daily business feels like a layer has been stripped away, revealing, once again, a deep fatigue, the accumulation of dull, stratified trauma. But none of these words are adequate.

Walking around in groups of two, squinting at the clear empty skies, we are a bit more like those farmhands 700 years ago. Trapped in a hierarchy, subject to state control, bored by the lack of novelty and the repetition of movement. We’re also free, like a prisoner, to watch the birds alight on the prison wall. If we want we can observe the exploding buds and unraveling tendrils on the trees and bushes around us with a different, calmer eye. And if we want, we can tiptoe into the gaping void that opens up in a life without distraction – the uncharted territory inside our heads and bodies and all it has to offer. Who knows what we’ll find.

Maurice Frank: I am a freelance translator and journalist in Berlin. Mostly, I write about eco-issues. I co-founded Exberliner Magazine, where I was a co-publisher for many years.