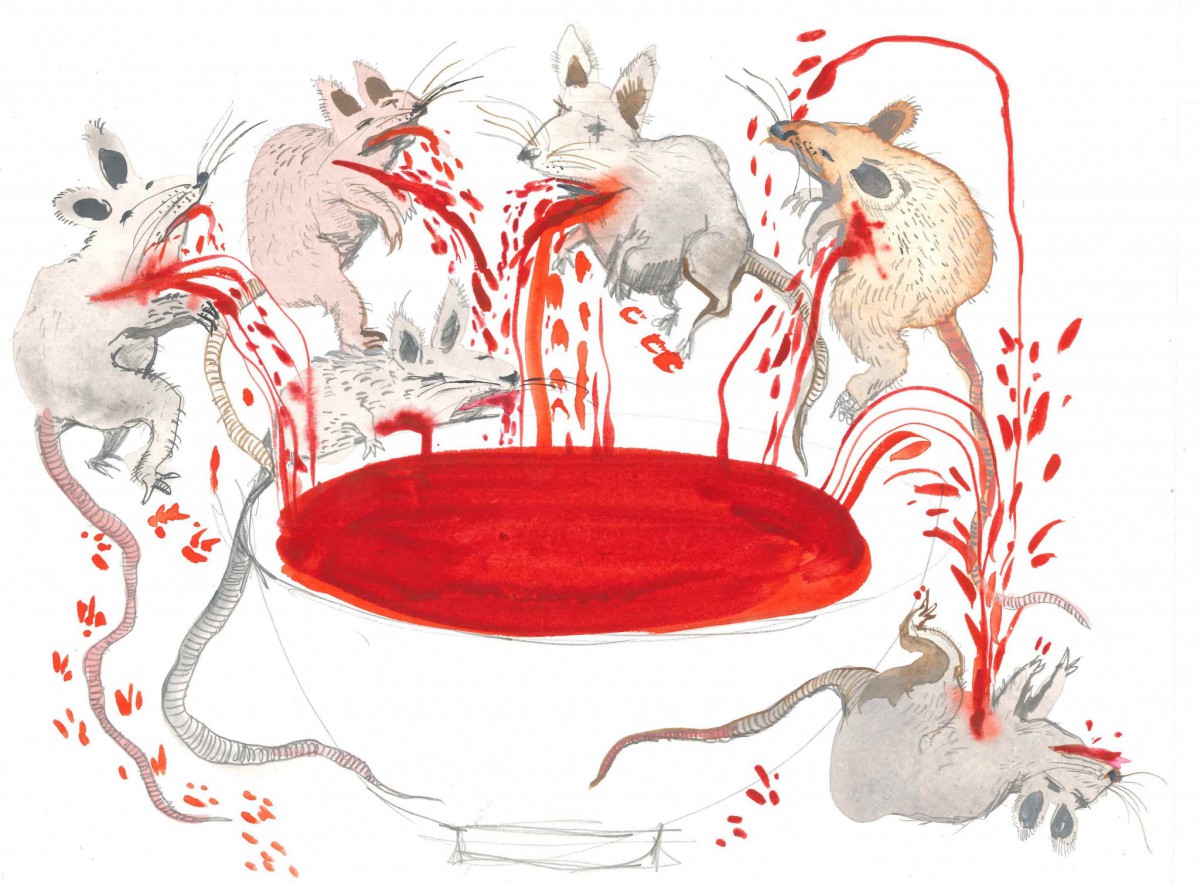 As a child, I was my father’s princess. Now that I am to be Queen, I like to think that he would find it a fitting end for me. He always believed in fairy-tales. More fool him. In this world, the strongest must make their own happy endings.

I learned that lesson early from my mother, with her fair face and disappointed eyes. That was her legacy to me, before she was dust in the grave, and my father abandoned his memories of her. He sealed his fate when he remarried, by loving my stepmother and stepsisters more and loving me less. They say that I reminded him of my mother; that seeing her long, golden hair cascade down my shoulders and her fair looks gaze out from my face was too painful for him. But in truth he drew back from me because my vicious stepmother poisoned him against me, telling him that I dealt in things that were neither good nor holy.

What would either of them know of my arts, learned at my mother’s knee? When I was but a little maid, my mother would brush my hair a hundred times, and murmur incantations with each stroke. She taught me how to use the moonlight reflections on a pond to scry the future, how to weave an illusion that fools the eye, and how to prevent ill-wishers from casting dark fortunes on me. She told me the tale of how she caught my father: he a wealthy merchant betrothed to another; she a beautiful girl descended from the faery folk. She taught me the glamour she had cast over herself to catch his eye, and the darker spell that caused her rival to sicken and weaken, until he left the other gladly, to take my mother as his bride. I have had cause to use that spell.

She would have taught me more, my faery mother, but not even she was immortal. A bolting horse knocked her down one day, and crushed her beneath its hooves. It’s true that animals did not rest easy near her.

After my father died – wasted away just like my mother’s rival – I soon took his place as head of the household. With his suspicious glances gone from the stairwells, his fatherly disapproval forever stifled, I let my strength free from its cage. When my stepmother tried to force me out, I took my silver-backed looking glass and showed her in the reflection how her husband had died. She understood then not to cross me.

Still, it was a lonely house, with only those silly, frightened shrews for company. This is not a world where a woman may comfortably live alone, and one needs the benefits that only a golden ring can bring. I had no godmother or patron to shepherd me to marriage, but had my mother not taught me all I needed to know? My stepmother plotted on behalf of her plain daughters, but how could they rival me? Whenever a suitor came to the house, while they were upstairs powdering coarse faces and trying to curl lank hair, I would slip innocently down to the parlour and flirt demurely. What man can resist downcast eyes paired with a coquettish smile? By the time those drabs entered the room, his heart would be mine. And I would send him home with it in two pieces in his chest, be he merchant’s son or trader’s heir. My mother once told me I was fit for a King. What were village boys to me?

The day the prince sent out his proclamation, I had sent one such suitor packing, and my stepmother was despairing of ever getting me out of her house. My stepsisters brought the invitation to me, and begged me to go to the ball. They too wanted me gone – plain women cannot abide having someone beautiful around. But I smiled at them and told them, “We shall all go to the ball.”

It entertained me to see the way those two sparrows started to preen. For fun, I dabbled in my little box of powders and potions, just to see them run gasping to the mirror with a new blemish, a sudden wrinkle, or a patch of hair that came away on the comb. Such little spells and tricks help pass the time. Meanwhile, I made my own preparations for the ball.

It is not easy, the kind of magic I did that night. It takes strength and blood, and firm determination. Six fine white mice I killed, and ran their blood into a silver bowl, where it mixed with my own, let from my veins with a glass knife. When my sisters came down, dressed in their finery, I served them goblets of wine, the first time I had ever deigned to serve them anything. “Come sisters,” I coaxed sweetly, “Let us go into the courtyard and see how the light sparkles on our jewellery.” Under the half-moon, their horrified, ugly faces lengthened into equine snouts, their twisted plaits loosened and coarsened into manes, until their whimpers of fear became placid wickers and whinnies and they stood before me champing and stomping their hooves. Much finer as horses than they ever were as women!

My stepmother I did not transform, but bound her with a length of red thread and a whispered incantation, then dressed her in the footman’s livery and powdered wig, to witness my triumph. A dab of mouse’s blood on her tongue and her throat was enough to seal her voice. I did not want her to find her courage while I was at the ball. Then I dressed in my mother’s wedding gown, every stitch sewn with her enchantments. I have heard it said that animals know a sorceress, but my two fine, white horses knew enough to lead my carriage sedately to the palace, and never dared to twitch.

Who was more radiant than I, that night? No woman smiled as sweetly, danced as lightly, or was cloaked with such an air of mystery. When the clock struck twelve, I had captured my Prince, heart, and more importantly, soul. But to conjure a marriage proposal from a night of dancing, he must believe our fates were intertwined. Like a frightened virgin, I ran from him, making sure to fumble my footing on the stair, leaving behind one little slipper, an exotic curio to stoke his desire.

When I have heard people tell the story, palace courtiers who think a retelling will please me, it is always a glass slipper. I have had one made of glass since, and I keep it on display, so that all who come to the palace will see it. I do not know what manner of person could walk gracefully in a glass slipper, which would neither flex nor give. I wore a normal shoe, made of softest silk and leather. But I hid slivers of glass in the toe, so that any woman who thrust her sweating foot into it would cry out in pain and quickly take it off.

He was fast, my Prince, faster than I expected for one of such dull wit. The next morning we heard the trumpets in the street, and word ran from door to door that the Prince was searching every house with eligible women in it, the slipper in his hand.

I made my plan. Enduring magic needs more than mouse’s blood, and while the Prince was still streets away I forced my terrified stepsisters to sit. With my knife I cut into their feet and caught their blood in a bowl. For my own, I breathed deep and incised lines across my palms. I daubed us each with the libation, and took cinders from the fire to draw the darkest symbols my mother had taught me: blood to transform, ash to draw the form each one shall have. Then I put on an apron and cleaned all traces of the spell away, and wrapped my injured hands in white bandage as if I had burned them on the stove, as if I was just some kitchen girl.

When the Prince’s men arrived, they thought that my stepsisters had mutilated their own feet to fit into the slipper. They would not let them try it on. They asked my stepmother if there was no other woman in the house, and mute and afraid, she shook her head. That is when they searched the house, and discovered me locked away in the kitchen. (Silly fools, they did not notice that the key was on the inside!) At their insistence, I placed my dainty foot gently into the slipper, and when the glass slivers cut my toes, I bit down on my tongue and did not cry out. How they rejoiced to have found me, and my simple Prince brushed the ashes from my hair tenderly and whispered that he would save me from all my troubles. One of his men demanded to know how a kitchen girl had come to be at the Prince’s ball, and asked if I could prove my claim. No doubt he would regret his clever tongue, were it still in his head. I was triumphant in my answer, drawing the matching slipper from my pocket, to fit it snugly on my other foot.

Well, everyone has heard the story. As the second slipper joined the first, the enchantment slid around me and those who watched whispered how it descended on me like a blessing. I was dressed once more in my finery from the ball, and my horses and carriage stood once more outside the door. My prince told his royal family that I was an angel fallen to Earth, but had not the wit to remember what a fallen angel is.

In short time, I made the prince my subject, and it was not long before he made me his princess. That day, two new white horses were brought to the royal stables. They are the only ones that I will ever ride or allow to draw my carriage; they are the only horses that do not shy at my presence.

My stepmother I have allowed to dress as a woman once more, and I find it very restful to have a mute maid by me. I grow weary of the palace servants’ gossip and whispers. And my Prince? He will be King soon, and calls me his Queen of Hearts, his dearest Ella, plucked from among the cinders. He has no doubts that we are blessed to have found each other, and tells me that I am the sweetest, gentlest woman in the realm. For now I can tolerate him. We are beloved by all the people in the land, and the wisest say that we will have a long and prosperous reign and will live happily ever after. They are right. I shall make sure of it.

Erin O’Loughlin is an accidental globetrotter, who isn’t sure how she found herself living in the creative mecca that is Berlin, but is enjoying it quite a lot. Instead of a mid-life crisis, she’s rediscovering the joy of writing, and recently had her story Klepto published in FTB presents: Irrational Fears (2015) compilation.