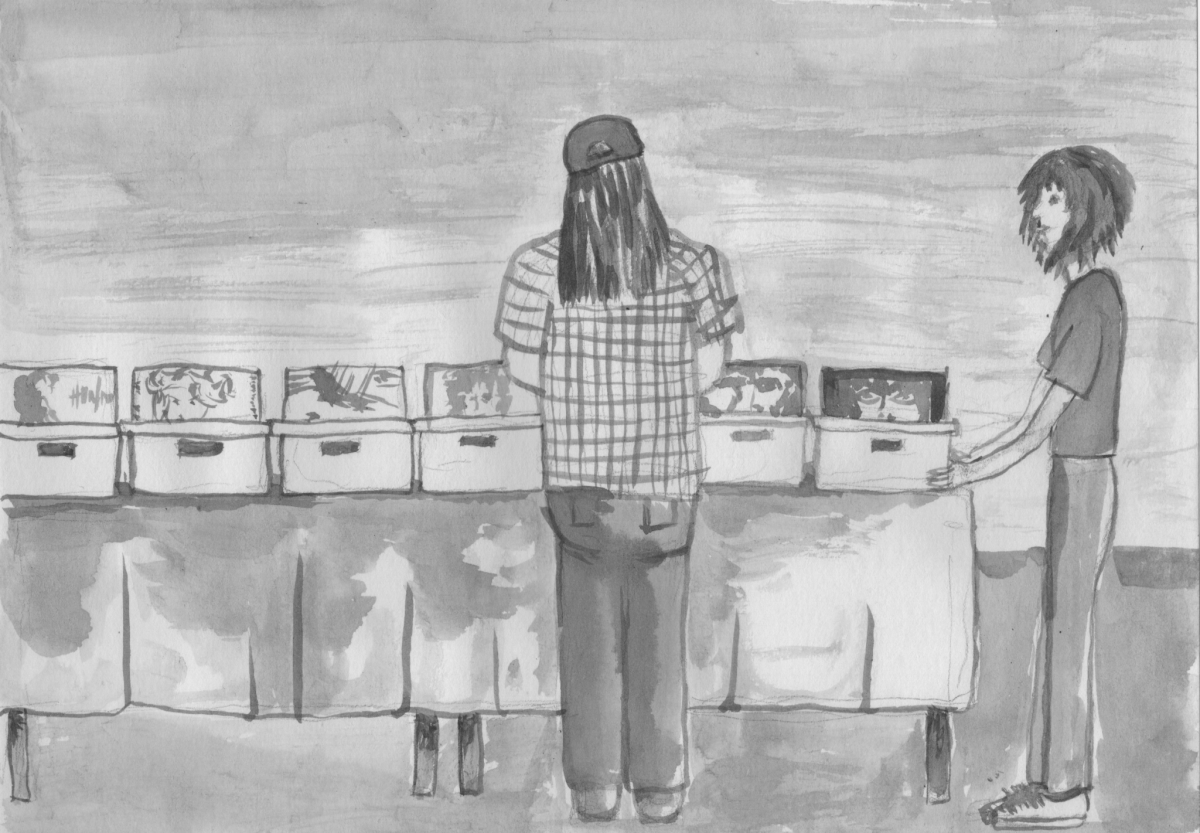 The man running the fifth record stall in the flea market had pink beads in his hair. He was shaking them to the beat of the smoky thick drums coming out of the speakers at his feet, and the appearance of his unselfconscious joy had driven away three customers now. Only five remained: a middle-aged couple, a teenage girl and her father, and an elderly man. The woman in the couple was leaning heavily against the man for something more than support, the edge of her smile pushing folds into his jacket’s shoulder. He was muttering about the organization of the ‘80s records—“The Smiths next to Madonna? Might as well spit on their legacy,”—and ignoring the way she kept sighing, louder and louder, in a showily content way that slowly grew more pointed.

“I wonder why you never asked me to marry you,” she said finally, with the happiness gone from her voice.

The teenage girl looking at the CDs two racks over was named Alice, and she was too close to do anything but listen. Under the cover of her hair, she saw the woman was no longer leaning on the man. He stared intently at the back of a record, his eyes unmoving, and she rubbed her face where the smile had been. What was it about the record stall that had brought the question? Was it the sound of the beads, or Madonna’s larger-than-life face? Did she look, perhaps, like whoever the man truly loved?

“You wouldn’t have your son then, or I mine,” the man said.

“Sometimes I think I would’ve given him up for this.”

“You know that’s not true.”

The woman crossed to the furthest box of records by the back post keeping the canopy up. Past her hunched shoulders, a van sat on the golden grass with its open doors aimed at the stall, more boxes stacked up inside. Alice looked at the man’s frozen hands covering the black and white faces on the record. He had a band of gold around his left ring finger.

The beads fell silent as the seller flipped the record. The elderly man had shuffled on to the next stall, which was full of long, colour-stained scarves that snatched at the breeze.

Alice was here with her father on their last outing to the monthly flea market before he moved out, but she wished she were anywhere else. That morning she’d helped him pack the last of his things into his pickup truck while Alice’s mother smashed shared porcelain knick-knacks against the garage door out back. When he’d asked her if she wanted to come to the market, Alice hadn’t felt able to say no. Her father was old now, older today than he’d ever been.

The man she’d been watching put down The Smiths picked up another record and crossed the stall to show the woman, his voice dropped beseeching and soft so Alice couldn’t hear. She moved away from the CDs down the row to where her father was sorting through some records.

“Is she who you really loved?”

Her father had been waiting for the question, so he didn’t have to ask what she meant. “No,” he said. “She was too soft to be loved. The emotion would have been too much pressure.”

“Why didn’t you tell me about her until now?”

And it was true. He didn’t think about his first wife much, and he kept the only album of photos from that part of his life on the top of a high shelf in his office with the old racing trophies he couldn’t look at. Now the album was somewhere in the bed of his truck, underneath his desk chair and his shirts. He wasn’t sure exactly where—Alice had been the one to find it and pack it earlier that day.

He looked at her across the rows of faded record sleeves and wondered what else he’d forgotten. She was taller than she’d been the last time he’d thought to notice how tall she was, and he realized suddenly that Alice was almost the same age his first wife had been when he had met her. The low-grade panic that had been following him since they arrived swelled in his chest and he gripped the edge of the table. How long had they been here now? The market closed at four—soon he’d be returning her to her mother and driving off. It was still midday, yellow light laying warm on Alice’s shoulders, and yet he couldn’t shake the feeling that any second now the seller would shut off the music, collapse the canopy around their heads and start packing away his records as neatly as Alice had packed away his own earlier that day. He still couldn’t tell if she was angry with him about the separation.

Alice was talking, and he hadn’t been listening. He made eye contact and nodded as he caught up: she’d found an album she was excited about, and it took him a moment to clock the woman seated on the cover.

Alice’s eyebrows slowly pulled together. “I know,” she said. “I hear it through your office door all the time.”

He’d spent most of her childhood inside his office, and it was the outside of that closed door that she thought of the most when she thought of him. That, and these trips to the flea market, which they had done once a month since as long as she could remember. Usually, they didn’t speak much here, apart from her wheedling him to buy her something.

He was quiet, but then said, “It would have been the woman who gave me that album.”

The answer to the question she’d asked before, she realized.

“No,” he said. His drawn face became younger. “I met her on a plane. We were sat next to each other and we talked the whole flight, three hours, about everything. Life, the universe, sex, God—it was the most frank conversation I’ve ever had with any person.”

“And this album came up?”

He turned the album over, scanning the song list. “All I was listening to at the time was Leonard Cohen. She told me I needed to hear the woman who first convinced him to start singing his songs instead of just writing for other people.”

“I was leaving the Middle East, and I wouldn’t be coming back. She lived in Kuwait. She told me, at the end of our flight, that her family — she was quite well-off — had given her permission to marry a Western man if she chose. I believe she mentioned it because she wanted me to know I could be that man. She wrote to me. I think I disappointed her with my responses.”

“You didn’t write back?”

“It wasn’t the same. Some things you can’t recapture.”

His hands flipped the square again and found Judy’s face on the front, a thumb tracing a slow line down from her chin to her stomach.

“She sent this record to me, years after we’d fallen out of touch. I was already dating your mother. It was the last time I heard from her.”

“Having me was worth it though, right?” Alice asked. Her father smiled. He knew she didn’t expect an answer.

Movement at a neighbouring stall caught Alice’s eye: the couple from before had transformed themselves, connected by bright strands of light. It was the scarves—the woman was looping a long golden one around herself and the man again and again, on tip-toes and giddy the way two people who have learned to live only in the moment can be. They were both younger than her father, but older still than Alice had thought people could be and still have emotions that loud.

Alice and her father moved on from the record stall. They weaved among the people on the path, stopping to look at tables of beeswax skin products and all-natural curry pastes, racks of handmade clothing and recycled purses, more boxes of old video games, CDs, and cassette tapes. Somewhere along the way, Alice lost her quiet resentment at being guilted into this last market trip. The afternoon seemed suspended outside of time, containing pieces of all the other visits they’d made here over the years. She thought of the first time the two of them had come to the market—her mother had been there—when her father had stalled them outside of a magician’s tent for twenty minutes just to show the other man up, pulling coins and candy and all manner of small objects out of her mother’s hair until her mother was doubled over and shining with laughter. It felt like she was betraying her father somehow by remembering a happy moment, so Alice stuck close to his side for the rest of the market walk, asking for more stories. What had his first wife been like? Her name was Candace? They knew each other in college? For once, her father spoke plainly to her, answering every question. Alice had never been sure her father loved her until now. It was cruel, but somehow watching her father describe his first wife in the worst words she’d ever heard him use made her feel like she knew him, like she was a woman he could trust with his unkindness. Perhaps he only knew how to love women he hadn’t taken to bed. A few days earlier, when she was firmly on her mother’s side and churning with capped rage, that would have been a vicious thought. Now it just seemed sad.

They returned to the record stall one last time on the way out. The seller had cut the bottom of one of his braids and was unwinding it with quick fingers. Three pink beads sat on the speaker beside him.

“I saw you before with the Judy Collins,” he said. “If you want, I can turn it on for you, show you the quality.”

“Actually,” Alice’s father said. “What do you have of Cohen?”

“We got Death of a Ladies Man, Various Positions,  I’m Your Man, Songs of Leonard—”

When the seller set the needle to the record, the voice, strangely small and nasal, cut through all other sound— if Alice closed her eyes the market wouldn’t exist at all, or the afternoon, or the memory of her mother smashing things, or her father telling her about the woman on the plane. So she kept her eyes open, and fixed on him.

Her father mouthed the lyrics, his jaw dropped open so all the words went soft. His teeth flashed, and she pictured suddenly the arc of his skull curving out from the top of them, the unchanged tectonics of a face whose surface had changed so much since those photos with his first wife. At first, she felt nothing but a pity so fierce it almost knocked her over. And then she was in a record store somewhere else entirely, buying music for a man who existed only on the edge of love at forty thousand feet in the air, a man she would never know as anything but young and happy and possible.

Alexandra Mae Jones is a queer writer based in Toronto. Her fiction has appeared in The Goose, and she is an MFA candidate at the University of Guelph. She has received a JHM for student journalism and previously worked as a breaking news reporter for the Toronto Star. 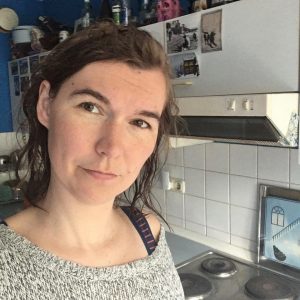 Verena Spilker organizes queer events and initiates transnational projects. Her dream is to do this full time. Or to build houses. For now she works as a web and media designer, draws and writes and builds small things. She also has two dogs which are (almost) instagram famous. https://verena-spilker.com/