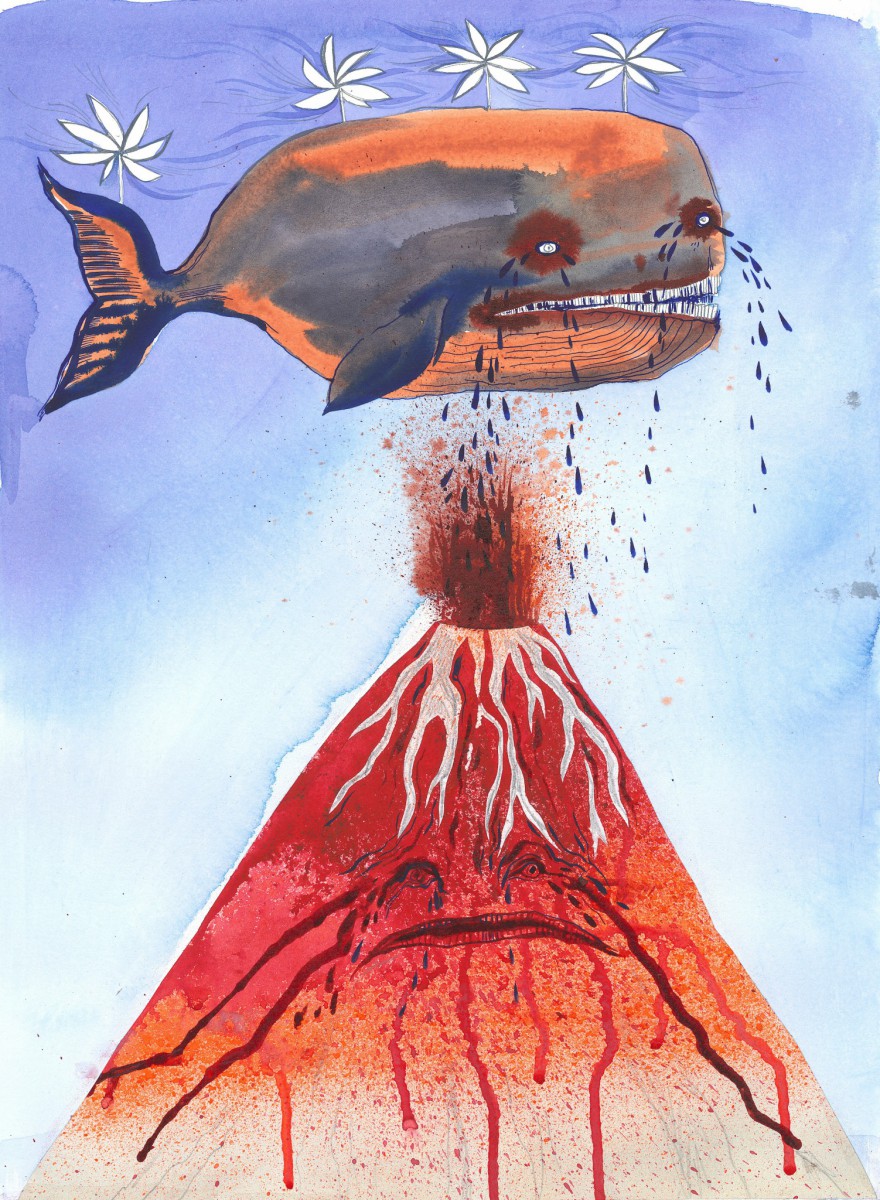 There’s a volcano and it’s about to erupt and kill everyone on the planet. It’s a very big volcano. There is also a whale. But the whale is dead. Luckily there is also a mad scientist, although she prefers to be called Gene.

So Gene has this big dead whale and no funding left because of her failed research on reading the minds of cuttlefish and there’s this big volcano that is about to make her and everyone else as dead as the whale. Perhaps deader. What is she to do?

Like any mad scientist worth their salt, Gene ties 5,000 wire coat hangers together in a strange mathematical pattern. As she constructs the configuration, Gene hopes that her endeavor will somehow save the day so that she can patent the wire hanger math pattern. Anyway, she hooks up the hangers to a computer or something and rigs the computer up with big heavy cords and plugs the cords into the dead whale. Before Gene flips the final switch she notices a flaw in her plan. There is no whale delivery system in place to transport the whale to the very big volcano.

Gene notices that she has fifty spare pairs of automatic cuttlefish inspired hover fins. So she welds and sews the technorganic hover fins to the dead whale and then runs to hit the final switch. A hatch opens above the wire hanger math pattern and from out of it falls a single drop of saliva. It’s just regular saliva probably taken from Gene’s younger brother or something but what makes it special is what happens when it touches the wire hangers. The hangers are arranged in such a way that the spit is divided into smaller and smaller volumes as it runs down the length of the pattern. By the time the spit reaches the last hangers it has been separated into 5,000 single molecules of spit.

The process of spit division generates enough electricity that the dead whale comes back to life. Gene is ecstatic. She calls her mother and tells her about her success. Her mother is very proud.

Sensing the impending doom of all life on Earth, the flying zombie whale takes to the sky. It arrives at the very big volcano but, although it wants to help, it doesn’t know what it, as a flying zombie whale, can do to stop the volcano. The poor, frustrated creature starts to cry over the caldera of the volcano. It cries and cries because it wants to protect the Earth and the mad scientist Gene and Gene’s brother who probably supplied the spit and Gene’s proud mother.

In a childish but terrible roar the volcano asks, “Why are you crying?”

The whale can’t speak but wants to tell the volcano how frustrated it is. The only thing it can think of is to keep crying.

“No please don’t cry! If you keep crying then I’ll start crying,” the volcano says.

And the volcano does start crying fat drops of lava that drip out of the caldera. The whale’s instincts kick in. The whale starts to sing. After all, singing is the only way to quiet a troubled calf. The volcano grows tired. It stops crying lava tears. It stops shaking the crust of the Earth. Finally, after the whale has finished its song, the volcano falls back to sleep.

Alex Vigue is a gay writer and poet from Washington State. Alex has been published in Phantom Drift, The Fem, and Emerge Literary Journal among others. He is the fiction editor for Dirty Chai Lit Magazine and he hopes to have a collection of his works published soon. You can find him on twitter @Kingwithnoname