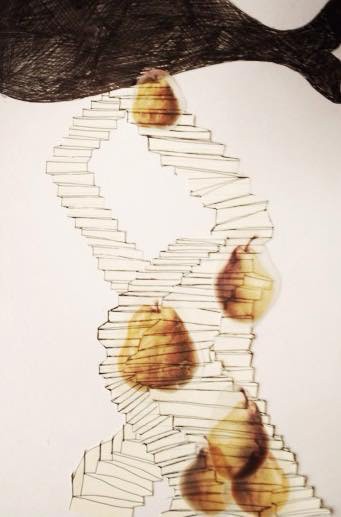 The whale is marooned
at the top of the stair.
How like a whale!
So vast! So salty!
She will tell it all her secrets,
her bluntest, low slung secrets;
the ones like snags
in factory silk,
slits in pear skin,
bitterest milk.
And when it ignores her
(numb, dumb monster!);
she pummels it
with pale white fists
slaps it, bites it,
climbs it when it wilts.

Tessa Berring is a writer and maker based in Edinburgh, Scotland.
Much of her work focusses on objects and their appearance in both art and writing, as intricate metaphors for the perpetual making, unmaking, and re-modelling of life.
A recent review of an exhibition in Whitespace Gallery, Edinburgh, described her work as ‘simultaneously humorous and unsettling’.