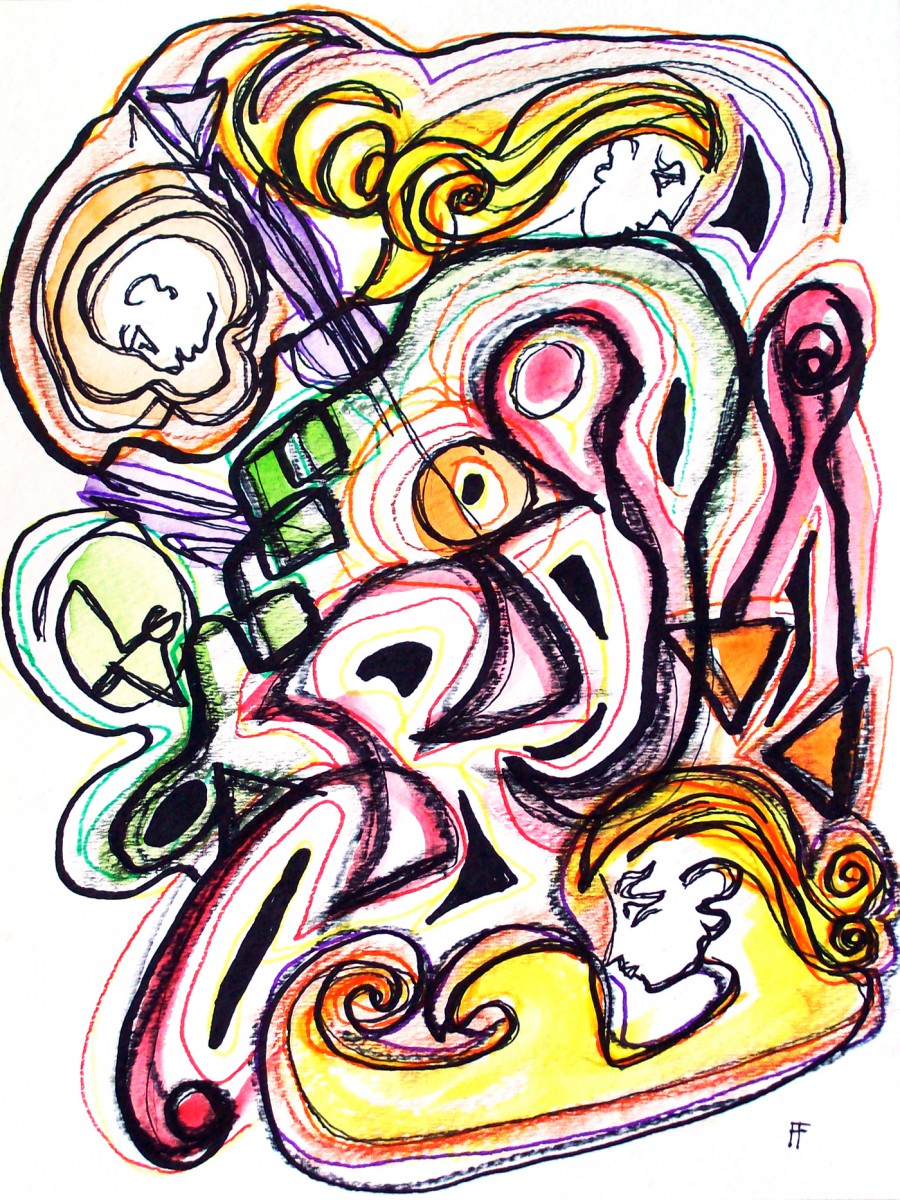 I go to meet her at the Greyhound station downtown. The New York bus is running 20 minutes late. Outside, it’s pouring rain, so I cool my heels, smoking cigarettes and slouching among the dim-eyed denizens of the old depot. I’m looking forward to seeing her again. It’s been a long time.

Two years ago, in high school, it was me and Tina. She was my drinking buddy. It was Tina who talked me into getting fake IDs, after she stole her cousin’s who had recently visited for Passover. She was henceforth to be known as Bonnie Deware, aged 22, from Staten Island. Now it was my turn. I remember sitting in the parking lot of the DMV as she handed me a birth certificate and paperwork she had “borrowed” from her brother.

Within minutes, under the big sign that threatened $10,000 fine and/or 5 years in jail for fraudulent misrepresentation, I paid the nice lady behind the counter, smiled and posed for a picture, and received a license attesting that I was Ethan Edenberg born May 17, 1962 Address 77 Summit Hill Ave, Cranston RI 02921.

And so Bonnie and Ethan were born.

Some nights she’d pick me up in her blue Nisson Centra. We’d cruise Providence, literally riding in circles around a little spit of a park, drinking Tango mix and gasoline vodka. Tina was crazy obsessed for Bruce Springsteen. “Born to Run” would be blasting through the open moon roof, so loud the drunks would throw their empty beer cans at us when we passed by. She’d laugh and give them the finger. We kept drinking, getting a decent buzz on before we hit the bar.

Back then Barry’s was the spot. It was a dance floor, it was a drinking hole, it was a place where people made out in the bathroom, and threw up out on the back deck. We drank sweet concoctions called Sicillian Kisses, Amaretto and Bailey’s, played Centipede and Asteroids in the video lounge, we danced whenever they played “She Blinded Me with Science”, our hands waving in the air. Out back we’d sneak joints in the warm night air, sweaty and breathless. The airport was two blocks away, whenever a plane flew low overhead taking off to some unknown somewhere, she’d blow smoke into the sky. “Lucky fuckers,” she’d say. We both knew we were destined one day to leave this pissant borough of Providence. We talked about our dreams out there among the plastic palm trees and Christmas lights. After graduation she was headed to New York, Manhattan, to go to FIT. Her idea was to be a fashion merchandiser, whatever that is, and I was thinking about maybe going to school in Boston. Psychology sounded interesting. “It’s all bullshit,” she’d say with a coughing laugh as we headed back in for last call.

We’d finish the night at Bickford’s, with pancakes and coffee, which she liberally laced from a flat glass flask she kept in her purse. By this point in the night, I’d be soaked with flop sweat in my polyester shiny shirt, my hair would be greased to my slick forehead, I’d be slurry and repeat myself. Tina was just waking up, fresh as a daisy on two long stems, poured into a red lycra mini dress, every inch alert and tingling. She’d talk a blue streak about guys: guys she’d done and guys she’d wanted to do, guys she hoped to do in the near future, guys she’d never do. It drew a bit of attention to our booth, which she didn’t mind at all. Whenever a man would look at her she would drop her eyes down to her baked apple tart, still talking about blow jobs and nipples, completely ignoring him, but her hair would maybe just so softly fall over her shoulder, and another poor shnook would be hooked.

I was amazed at her prowess, her confidence. To date, my sexual history consisted of some furtive after school fumblings in someone’s paneled basement rec room, and an unrequited love for Giacomo D’amico, the middleweight wrestler from school, whose broken nose gave me many a panic whenever I saw a sight of him in the hall.

But Tina always had a ton of guys in her little book. She actually had a little book. She had nicknames for them all: there was the Greasemonkey, Pee Wee, Pencil Dick, Nicky No Neck, Mr Married, Foot Long Frank, Donnie Osmond, Jaguar, Angry Guy, Stuart Little, Guido, and the Donkey, and those are just the ones I can remember from that year. (There was one who slipped in for a while and jostled her composure, he had disaster written all over him, a tattooed small time pot dealer who drove an old woody station wagon and had a girlfriend in West Warwick by the mall, he had pockmarked skin but beautiful teeth, and according to the local reports he had an enormous equipage with appetites to match. Things were hot and heavy for a while, until that night at the drive in when the girlfriend showed up and there was a fight with hair pulling and kicking, and the next day in school everyone said that there was a knife but there wasn’t. Anyway we called that guy Zitface for the rest of time, and there was never another unguarded moment in her amorous pursuits.)

When her bus pulls in I crush my cigarette underfoot and get ready to meet her. She’s there, easy to spot in the crowd, big hair, blonder than ever, big tits, big smile. “Hey fucker,” she says. We hug, and I smell the whiff of pricey perfume, exotic and feminine, ambergis and moonlight. “Look at you!” she says. “You look like that Flock of Seagulls guy. I love your hair!”
“How was the ride?”
She rolls her eyes. “Not one hot guy on board. I’m like a girl stranded on a fucking desert island.”
We grab her bag, a knock off Gucci she got on fifth avenue from some one legged guy, she tells me. “You sure it’s ok if I stay with you?”
“My room mate’s away. “
“Is he cute?” she nudges me. “Did you do him yet?”
“He’s straight,” I sigh. “Some of them are, you know.”
She shrugs. “Let’s get a drink somewhere, I’m getting the shakes.”

I take her to the top of the Pru, for the view, but it’s such a blank foggy day it’s like were peering into a cloud, floating over Boston. We have a few rounds. We’ve graduated to martinis, now that we are adults and don’t need our fake IDs. “Cheers to Bonnie and Ethan,” she says, clinking my glass, “Those poor stupid kids.” Her cerise V neck top is cut so deep I can practically see her cervix, and her cleavage is like a lightening rod for men. She flirts with the bartender. She flirts with the head waiter. She flirts with the busboy, who winks at her. By the fourth drink, she’s in full swing. We’ve covered the topics: school is fine, folks are fine, she LOVES New York. Everything about it is amazing. “So many men, so little time,” she sings a bit of that song, swaying on her bar stool, despite the looks we get from people. “The city is so big, you know?” she chews the pimento from the bottom of her glass. “It’s like you never know what’s gonna happen, or who you’re gonna meet. You can be anyone you want to be.” She’s smoking a Marlboro Light. She’s antsy, ready to leave, ready to move on. She’s on Manhattan time.

In the bathroom mirror, under the harsh white lights, I get a look at myself, like I’m shimmering underwater, my hair plastered to my head, my forehead beaded with drunk sweat. It feels like my brain is pickled in olive brine, dirty martinis course through my synapses. “You can be anyone you want to be,” I say to my shitfaced reflection, and we both laugh.
He was still laughing his head off, when he walked out, leaving me with my head on the cool marble of the sink.
And that was the last time I saw Ethan Edenberg.

Norman Belanger is an HIV care nurse by profession, and a writer by some character flaw to be worked out in extensive therapy. He lives in Cambridge, MA. Some of his short works of creative non fiction can be seen in AIDS&Understanding, Red Fez, Sibling Rivalry Press and Blunderbuss magazine. Follow him @norman_belanger

Graphic artist and painter Allen Forrest was born in Canada and bred in the U.S. He has created cover art and illustrations for literary publications and books. He is the winner of the Leslie Jacoby Honor for Art at San Jose State University’s Reed Magazine and his Bel Red painting series is part of the Bellevue College Foundation’s permanent art collection. Forrest’s expressive drawing and painting style is a mix of avant-garde expressionism and post-Impressionist elements reminiscent of van Gogh, creating emotion on canvas.
allen-forrest.fineartamerica.com
art-grafiken.blogspot.ca
twitter.com/artgrafiken