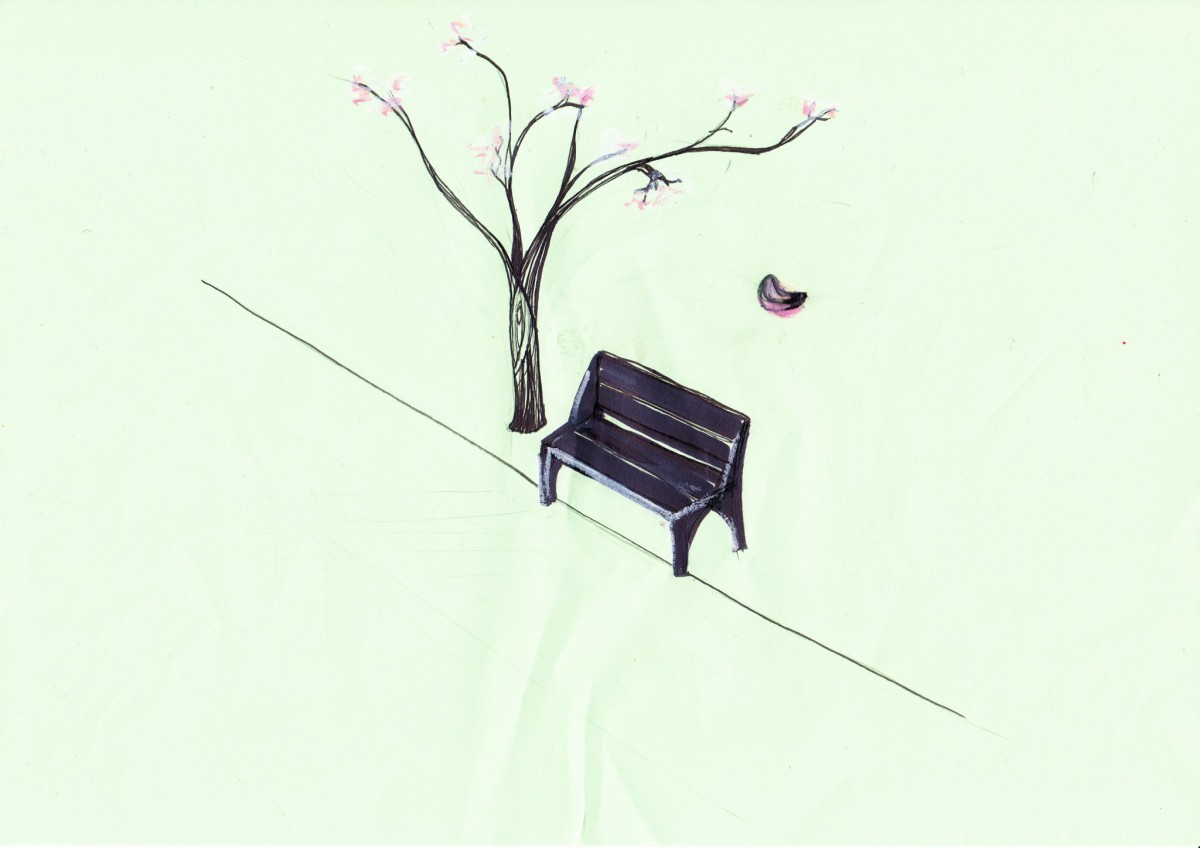 “I’m not sure you want to go,” Jonathan told her as he drove her from the airport to his home, where she would be staying for two nights.
“What do you mean?” she asked cagily. She had flown from America to England to see the bench. The bench and the tree, because in the same town there was also a tree to which someone else would be taking her the following day.

“I mean,” he said carefully, “the inscription is … delicate. You might not like it. It might make you sad.”
Her face relaxed a little, and she ran her fingers through her red hair, which she had been telling everyone who complimented her on it—long, luscious, that of a vegan—that it had faded since the last time she had been in England.

“Oh, Jonathan,” she said, “It will make me sad, anyway.” She did not say she was already sad and hoped for closure, not having been at the funeral three years ago.

They stood with her before the bench when the time came, Jonathan, his wife and Manon. She peered at the inscription carved into a small, golden plaque. In the time it took her to say anything at all three people and their dogs had walked past.

“What does it mean?” she asked them, not taking her eyes off the bench.

They looked at one another, Jonathan and his wife, and he shook his head slightly just as she opened her mouth to speak.

“I don’t think I like it,” Manon said in the same tone of voice, as if it were a question she was asking herself.

At last, before she turned away resolutely, her mind made up. “I don’t think I will come here again.”
In the car on the way back to the house she was silent until Jonathan had parked and turned off the engine. Their bodies were still humming a little when she said, “He called all of his women Petal.” She spat the last word so that it sounded hard and ugly and not like a part of a flower at all, and several tears dripped from her nose into her lap.

“Including you, I’m sure,” Jonathan soothed, and his wife elbowed him sharply in the ribs. “There’s still the tree,” he said quickly, and his wife nodded. Manon nodded too, and wiped her face with the back of her hand. She inhaled deeply and abruptly, a full stop. When she looked up again she was smiling.

That evening she showed them short videos of herself. In each of them she was pretending to be someone else, apart from the one in which she was playing the ukulele and singing.

“You’re doing really well,” Jonathan’s wife said, and Manon played with the stem of her wine glass a little coyly.

“Keep going,” Jonathan added. “One day you will be famous, we’re sure of it.” Jonathan and his wife had discussed Manon’s career in film over a plate of grilled octopus and a bottle of wine the week before, and had decided that fame would destroy Manon more than the lack of it had already done.

“I hope so,” Manon replied, “I’m so sick of crisp commercials and voice-overs.”

The next day Manon left with a friend she had not seen since before Peter’s death to pay her respects to the tree. When she returned three hours later her face was drained of all colour, and even her hair looked lacklustre and lifeless.

“And?” Jonathan asked gently as Manon stood in the kitchen door with her handbag clutched to her chest. He was chopping the stringy, gristly bits off two chicken breasts before throwing them into a pan. Manon’s spongey tofu lay marinading in a bowl of soy sauce, lemon juice and pepper.

“Oh, darling,” he said, wiping his hands on his apron and reaching for her, “Was it hard?”

“We didn’t find it,” she said, taking a minuscule step back to avoid him. “We walked for such a long time, looking at each one to see if it was the right one. She couldn’t remember where exactly it was. I was hoping it would…” she trailed off and Jonathan imagined Manon stumbling from plaque-less tree to plaque-less tree with the words of the bench inscription scratching around her head, steam-rolling over memories of Peter.

“You didn’t find it,” he stalled helplessly.

“No,” she said, quietly. She left him scratching at the browning, hissing chunks of chicken already sticking to the bottom of the pan and lay down rigidly on the sofa, still holding on to her handbag.

The following day Jonathan drove her back to the airport, which appealed to his idea of the symmetry of her visit. When he returned he and his wife spent an evening talking about Manon.

“How did you think she looked?” he asked her, and they talked again about her hair, how thin she had become and how quickly the laugh left her face. They talked about her veganism—a cheap distraction—about her videos, which he found embarrassing but of course had not said in her presence, and about her endless apologizing.

“If a person could erase themselves with sorries,” Jonathan said to his wife, “then she would have done it by now.”

They moved on to her reaction to the bench inscription. Jonathan’s wife said she thought there couldn’t be a more perfect example of closure, and that Manon had done what she came to do. “Peter was human and no saint. He was just a man.” It felt good to finally say it. “A kind one, one who liked good food and good wine, but he was human and no saint.” She repeated herself, for she really believed that Peter had been slightly less exceptional than how Manon remembered him.

“You think that’s kicked him off that pedestal, hmm?”

“Yes,” she said very firmly, “I think that is exactly what it’s done.”

“I will never forget how she flew back to care for him just before he died,” Jonathan said. “I can forgive her anything because of it.”

“There is nothing to forgive,” said his wife, feeling suddenly she had overstepped an invisible cord that had all this time bound her husband and Manon together.

“No, no, of course not,” he said, but his wife knew he was elsewhere, perhaps driving Manon back to Peter’s home from the hospice.

“But that really is something I will never forget. How she said to me in the car after visiting Peter,” —Jonathan’s wife had been right, there he had been— “’Jonathan,’ she said to me as I was driving, ‘Peter said something to me which has broken my heart forever.’”

Jonathan swallowed, the retelling of it seemingly breaking his a little too.

They were silent as they both thought about how none of Peter’s other Petals were there to dry between his toes as he died.

“No one loves you more than I, Petal,” Jonathan said jocularly after a while, having successfully shaken off his sadness. He reached for his wife across the table. She swallowed and let her fingers be enveloped in his, and Manon was forgotten.

Charlotte Wührer is an English Literature graduate from England. She lives in Berlin, where she is studying for an MA and working as an editor and translator. Her short fiction has been published by Visual Verse. Her story Bringing Back Bob was short-listed for the Reader / Ex-Berliner short story award and can be read here. She is currently working on a Young Adult novel. You can find her lurking in second-hand bookshops and writing in cafés.

Marlitt Riemenschneider lives and works in Berlin. Her illustration appears alongside the story Petal