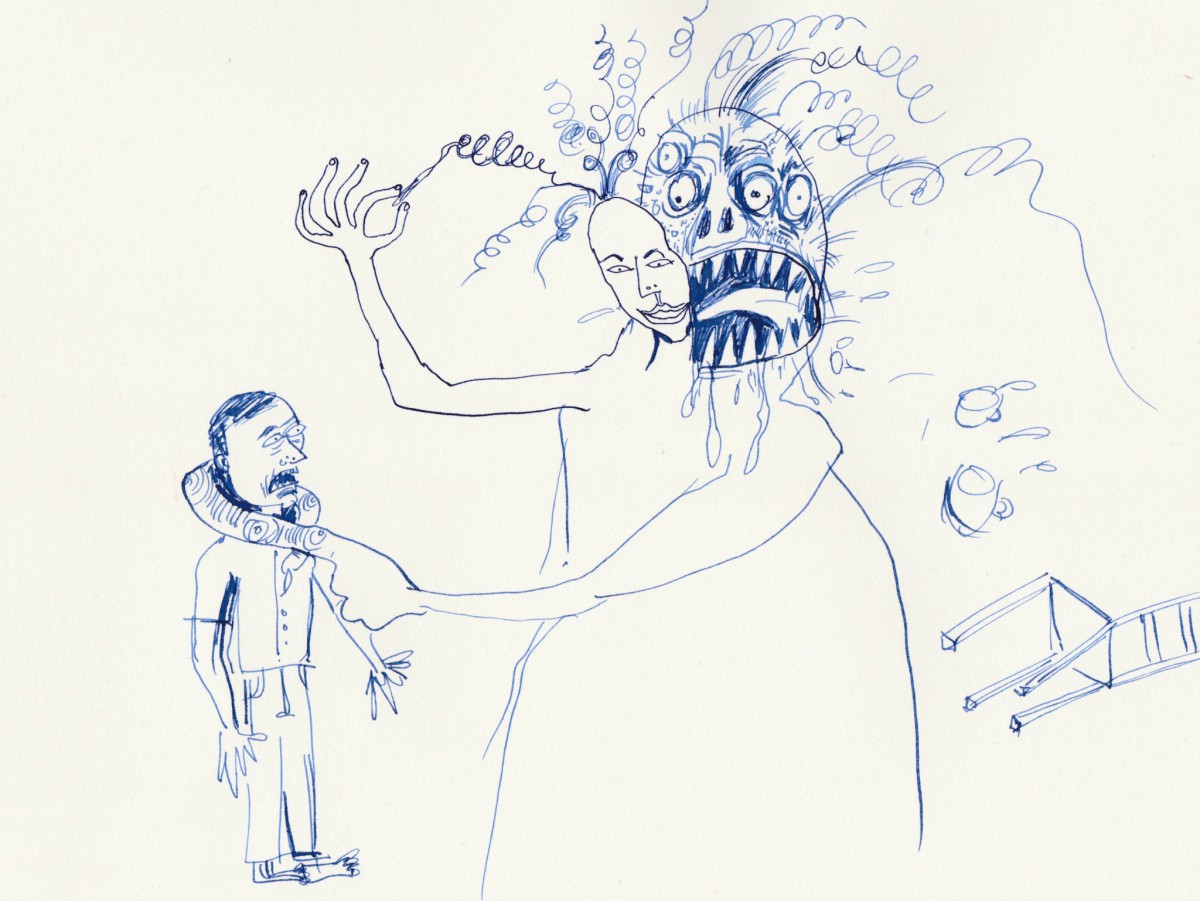 She sat cross-legged on the carpeted floor of The Tinted Tea Room, scribbling furiously in a tatty old notebook. He saw her there every Sunday, hunched over, tongue protruding slightly in concentration, barely ever looking up from her notes. Her hair was a riot of springs and coils and curls tumbling over the pages, occasionally getting in her way and being absentmindedly thrust back over her forehead, only to cartwheel its way back down again. She chewed her cherry lips as her pen flew across the page, her caramel brow furrowed, her foot tapping on the floor, impatiently waiting for the next thought to release itself from its cage.

He had been mesmerized that very first Sunday he saw her, three weeks ago. He had been too shy to talk to her, working his nerve up for an hour only to watch helplessly as she packed up her things and left, not even a glance in his direction. Every week after that was a special form of torture. First wondering if she would be there; then working up his courage; then feeling that lump of insecurity crawl slowly from his stomach to his throat; then leaving, dejected, having not accomplished anything.

He sat at the table across the room from her, absentmindedly munching on the Tea Room’s free Tartly Tinted Bread, wondering what she was so busy writing about. He sometimes imagined she was writing about him. He imagined a lot of things. He had, in fact, imagined their whole lives together, starting with that first look of love, right there in the Tea Room:

He accidentally knocks over her tea as he walks by, all cool confidence. She yelps in surprise, he apologises profusely while kneeling to help her clean up. “Let me buy you another,” he says (even though he is so broke he only ever orders tap water), but she insists he doesn’t need to. They laugh shyly at each other there on the floor, looking deep into each other’s eyes and BAM! They’re in love.

She’s being harassed by the resident brodude – the type that swims through his Axe body spray on his way to the gym, who sports sunglasses indoors and wears a fedora with no irony whatsoever. The type for whom “no” means “try harder”. “Is this guy bothering you?” he asks, strutting over to save her all heroic-like. Brodude considers claiming his territory, but skulks away when he sees the Hulk-like rage simmering under his opponent’s eyes (even though he is so skinny they called him Tony Bony Macaroni all through high school). She looks at him with relief, he holds her stare and BAM! They’re in love.

An armed robber comes barreling through the Tea Room doors, yelling for the patrons to “eat the floor!”, his gun flailing madly in the air. The gunman grabs her as a hostage, his eyes wild, his pupils dilated, the need for his next fix palpable. Amidst the screams and chaos, he makes eye contact with her and gives her a wink. Creeping slowly across the floor military-style while the gunman continues to scream and bray, he karate kicks the junkie to the ground and knocks him unconscious with one swift blow to the head (even though he was laughed out of the gym for doing pushups on his knees ‘like a little girl’ and even then not quite making it to ten). “You’re my hero,” she would say, because girls really said those things, and he grabs her face and kisses her deep and BAM! They’re in love.

He blinked himself out of his daydreams to find her standing right in front of him, her beautiful mouth twisted in a menacing sneer. Was this real? Had she actually spoken to him?

“Get down, slowly, do not attract attention, and do it now,” she said through clenched teeth.

“But…why?” he said (even though he had already begun slowly sinking to his knees.)

“Because you’re wearing a blue shirt and we decided to spare the ones with blue shirts. That was the deal.”

“You’ll see,” she smirked, giving him a wink with her beautiful green eye before pulling on one of her curls. She pulled and pulled until it was straight. And then she pulled some more until her curl began to pull her skin from her forehead. She was unzipping her face, shedding that caramel skin – so good enough to eat – to reveal a gnarled and knotted beast.

By this time he was flat on his belly, his neck strained up at an awkward angle as his eyes took in the unreality before him. Was this his Tea Room girl? It chuckled at his confusion as it pulled the rest of its hunched and hideous body free.

“But, this isn’t how it goes in my daydream,” he whimpered, glancing around him to see other blue-clad people quivering on the floor, their eyes wide and horrified as half a dozen curly haired women peeled their human flesh from their grotesque bodies.

There was a moment of stunned silence before he heard the first scream and panic erupted. The ghoulish creatures cackled in delight as they chased and cornered the poor unfortunate souls, like cats playing with rats before the kill. He hid his head in the crook of his arm, not wanting to see his own inevitable fate, unable, though, to block the sucking sounds and demented laughter of these… what in the hell were they, he wondered, confusedly. How is this happening, he asked himself, incredulously. What in the hell had she been writing, he thought, randomly.

He tried to lose himself in one of his scenarios, but his mind was muddled with shock and disbelief, his body shaking on the floor as he screamed in harmony with his fellow Tea Room patrons.

After what seemed like an eternity he realized the chaos had subsided, the satisfied grunts of well-fed animals the only sound to be heard. He dared himself to raise his head, but immediately wished he hadn’t. She…it was once again standing before him. It dragged him to his feet with its long, spindly fingers until they were face to…whatever was staring back at him. He searched for a trace of his Tea Room love, hoping, perhaps, for a glimpse of kindness, finding only a promise of pain.

“Now my bright boy blue,” it said, it’s voice like kindling about to flame. “Let’s make sure you don’t remember our little escapade. We wouldn’t want to miss you when we feast again next month.”

It held his head in both its hands, looked deep into his frightened eyes, and

Tonisha Robinson fell from a Jamaican coconut tree many moons ago and landed in Berlin. She lives with a large Czech, an oversized stuffed monkey and an imaginary Golden Retriever. The monkey is Luigi, the dog’s name is George, and the Czech is called Schatz. She is trying to get off the corporate hamster wheel so she can write full time and make George a reality.