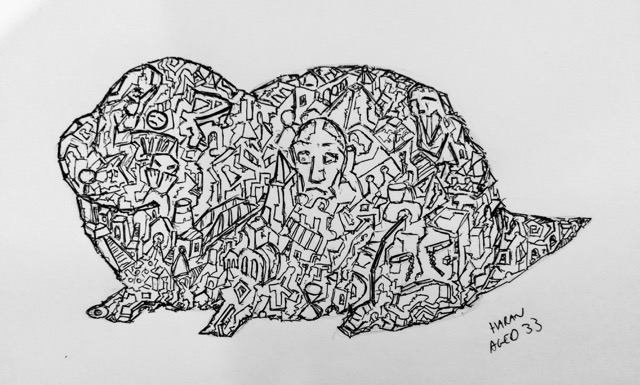 “Life will get better”

Lenny the Lemming always hated this phrase. It was a phrase laden with hubris, as if the person who uttered it could confidently predict the trajectory of one’s life. Life could get better, perhaps. But it could also get worse. The trajectory of life was as capricious and unpredictable as that of the best-made North Korean missiles.

“Life will get better, Lenny,” repeated Gary, who seemed to think that the sheer repetition of a platitude somehow gave it greater veracity. “The arc of the universe is long, but it arcs towards better times.”

Ah, classic Gary. He always had just the trite quote for the right occasion – the kind of inspirational quote that always seems to come, recycled and context-free, from the mouths of the most uninspired of animals.

“You’re missing the point,” replied Gary, apparently untroubled by the moral ramifications of plagiarism. “The point is, Lenny, what you’re feeling now is temporary. Fleeting. It doesn’t have to be like that in the future, does it? Don’t make long-term decisions based on short-term emotions. Life will get better.”

This last statement was patently untrue. Not only was it untrue, but it also betrayed the youthful naiveté with which Gary navigated life. Suffering, isolation, bitter winters that rendered weeklong forages for food both literally and metaphorically fruitless: these were alien concepts to Gary. Here preached a young lemming that had been largely cosseted from the trials of Nordic life. A mere pup, Gary’s wisdom came not from lived experience, but from a diet of agony aunt columns and self-help books that left their readers bereft and their authors wealthy.

And it was from this diet that Gary concocted his romantic but jejune world – one where “everything happens for a reason,” where “it’s never too late to chase your dreams” and where, of course, “life will get better.”

“Life will get better, Lenny… Besides, you haven’t got it as bad as Ian”.

Now here was a statement that was true. If one lemming did have it worse than Lenny, it was Ian.

Ian’s wife and three pups had all perished back in the famine of ’15 – just another black year of an inexorably black life. With his distinctive walk, the result of a contorted spine, Ian was easy to spot in a crowd (something which, being socially anxious and keen not to be the centre of attention, he deeply resented). It didn’t help matters that Ian also bore a prominent scar just behind his left shoulder. This fibrous interval in his fur stood as a monument to the time he was attacked: ravaged by a group of crows apparently trying to live up to their collective name. Of course, whatever didn’t kill him, made him considerably weaker (much like the neurosyphillis that plagued Friedrich Nietzsche’s later years). These days, Ian rarely had the energy to leave his burrow and it had been a while since anyone had passed him in a tunnel. Yes, if one lemming had truly been dealt the worst cards in life, it was Ian.

Yet Ian ploughed through life regardless, weathering the barrage of insults that it threw his way. Never one to indulge in self-pity, on the rare occasions you did see Ian, he always sported a smile. And it wasn’t the resigned smile of a condemned man, for whom things could not possibly get better, but the grateful smile of another condemned man, thankful that he had just eaten the tastiest meal he was ever going to eat.

Perhaps this was the stoic optimism that Lenny needed. He should be more like Ian. Granted, Lenny had also fallen upon black days, and his life couldn’t exactly be described as ‘great’. But, at least it wasn’t as bad as Ian’s.

As Gary struggled to bring yet another one of his life-affirming soliloquies to an end, Lenny resolved in his head to visit Ian the next morning. Even if Ian’s optimism didn’t rub off on him, he could at least perhaps, as a tourist of the third world is wont to do, make himself feel better.

The door to Ian’s burrow looked as neglected and beaten as the lemming himself. Long, damp winters had stripped away the paint, exposing naked wooden panels, rotten and gaping like much-m(is)aligned British teeth.

Lenny knocked on the door.

A shrunken, doleful face answered. It didn’t belong to Ian.

There was an awkward pause, the kind that portends the phrase, “It’s not you, it’s me.”

“I’m afraid he’s no longer with us,” the shrunken face softly replied.

“Oh dear, I’m sorry to hear that. May I ask what happened?

“Well, sir, Ian’s body was found last night, washed up against the shore by Hamsen Head. The police think he must have jumped from the cliff edge. He was terribly depressed of late.”

“Oh gosh, that’s terrible.” Lenny didn’t know what to say next. Luckily he was rescued by social convention. “I’m so sorry for your loss…is there anything I can do to help?”

“Thank you kind sir. No, we’re alright at the moment; we’ll pull through with time. May I ask your name, kind sir?”

As the door closed, Lenny suddenly had the urge to run. His eyes reflexively swelled and leaked; his throat grew engorged with sadness. But this wasn’t the sadness of having lost a friend, or even of having heard the tragic story of some far-removed stranger. No, this was the unbearable weight of realisation, that overwhelming disappointment that shortly follows a sudden insight into the true nature of the world. You could describe it as a ‘Eureka’ moment, but this was more akin to discovering that Archimedes had drowned in the bathtub.

Lenny ran. He scampered as fast as he could to the now-tainted Hamsen Head. He peered down at the waves below: the same violent waves that had just yesterday swallowed the exhausted soul of a lemming who had nothing to live for, for whom life did not get better.

Now Ian had perished, Lenny realised the he was the worst off lemming. Suddenly he was the bottom dog, the lowliest have-not in all of Norway. There was no-one worse off than him. “At least you haven’t got it as bad as Lenny,” Gary would tell some other dejected lemming.

And with those words echoing in his mind, Lenny jumped.

The next day Gary went for a morning stroll. He could do with clearing his head. News of Ian’s death had passed quickly through the slice, but Gary wasn’t one to allow himself to be encumbered by bad news.

“Today is going to be a good day,” he thought, his face adorned with a self-satisfied smile. The fresh coastal air wafted through his whiskers as he whistled gaily to himself.

It was then that he caught a glimpse of something black on the shore. Standing on the cliff edge, he reluctantly craned his proud head downwards.

There it was. A swollen, weathered corpse, tossed dismissively across the sand by each and every wave. He quickly averted his eyes, away from death, away from the negativity.

“Oh gosh, that must be Ian,” he thought.
But hadn’t Ian perished a couple of days ago? Hadn’t his body already been retrieved by the police? There had already been a post-mortem, he recalled.

Gary steeled himself and looked down at the corpse once more. There was no distinctive scar. The dead lemming was unrecognisable from atop the cliffs; he needed a closer look. Although the battered body was probably well beyond rescue, maybe Gary could be of some help? Cautiously he descended the cliffs, tentatively placing one paw in front of the other like an out-of-practice funambulist.

About half way down, a pair of damp, lifeless eyes peered back at him.

His words merely dissolved into the cold indifference of the ocean.

Gary scrambled down more quickly. As he did so, his head was flooded with memories of his dead friend. All those conversations with dear Lenny, all that advice he had given, all the encouragement and hope he had offered. Did none of that mean anything?

Amongst this tumult of thoughts, one lingered slightly longer in Gary’s conscience. “Could I be at fault?” he briefly pondered. “Maybe I was wrong about life?”

Gary continued to scramble down the cliff, picking up the pace like a nascent tear trickling from a melancholy eye. Suddenly, his hind paw skidded. He lost control.

Instinctively he tried to right himself with his other three paws, but the momentum and sheer incline took his stubby tail onwards and upwards, over his head. As he landed, a mossy rock jutted and gored into his spine. But the rock, covered in damp, green moss, that seemingly benign flora, did little to halt his descent.

Instead, he slid, supine, down the slippery slope. Gary was eventually swallowed by the unforgiving ocean below, becoming its third consecutive victim that week; the sanguine trail he had left down the cliff his only epitaph.

Haran Sivapalan is a science writer and amateur stand-up comedian (under the stage name “Haran X”) based in London, UK. He has published essays and stories in PopMatters, HoboPancakes and The Offbeat, and penned a chapter in the book House MD and Psychology: Humanity is Overrated. You can find his nerdy drawings on Instagram: haran_x. He’s also a regular guest on the literary-themed Faking Lit Podcast. (Headshot by David Shakespeare)