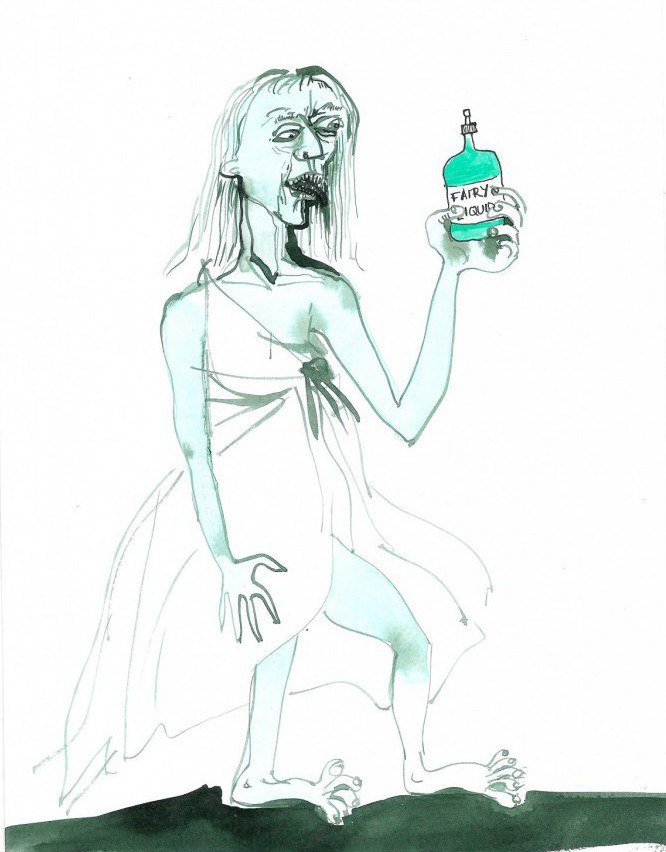 I died last night. I have no recollection of the accident that killed me, if there actually was one, but I died. Of that I’m sure.

I can feel the cold, smooth table underneath my bare bum and back. I can feel my hair, wet, some of it sticking to my forehead and a sheet covering my entire naked body. I don’t know how but I can feel this.

It’s cold in the white-tiled room, dimly lit with neon blue lights. I can see a row of small windows on the far wall. I’m in a basement. And I can hear the odd car driving through light rain, treading softly on the wet pavement outside. It’s night.

A woman of about sixty with badly dyed brown hair walks in. She must be the pathologist. She scowls, like an angry grade school teacher as she examines my body carefully, suspiciously. She grabs a defibrillator. A little late, I think. Am I thinking? She places the paddles on my chest and says, “Clear!” Arrest fibrillation. Sinoatrial node. Blank. I seem to have random pockets of fancy information blooming in my dead head.

My bluish, green body (I assume that’s what it looks like) jolts and my arms flap lightly with the movement of my core. My dead weight falls hard on the table.

“She’s dead,” she says patronizingly to no one as she lets my left arm drop. We’re the only two people in the room and she knows perfectly well that I’m not listening. Well, technically I am but for the sake of making this death thing work she doesn’t have to know.

“I don’t want anybody touching her!” she yells. Then she covers me with the white sheet again and leaves the room.

I want to move in my deadness but I can’t…until, I find a trace of concentration somewhere, floating, like lingering smoke from a dead cigarette someone just put out. Slowly, very slowly I begin to move my toes. Then I start feeling my legs. Eventually, my arms and fingers begin to respond as well. I feel them far away, removed from my body, floating in a dense dark cloud where I can vaguely control them.

“Hello?” it says… I mean, I say, hoping someone comes. “Hello!” louder this time. Nothing.

Move. Move. I can move my fingers now. I lift my arms and sit up. “Hellooo!”

A young man pokes his head through the door. “What?” he says. He’s wearing shorts and a white T-shirt. His hair is all tousled.

He shrugs. “Then go,” he says. “Go before she comes back. But make sure you’re dead when she checks you again. She’ll be angry if you’re not.”

He mutters something under his breath and walks away.

It takes a while but I gather all my cold, abstruse strength and jump off the table. I make it to the window and crawl onto the wet pavement outside. Not bad for a dead girl.

It’s dark and drizzling. That drizzle that makes your clothes damp without you realizing it. This time it’s just my skin though, sticking to a body that moves. It moves but doesn’t live.

I don’t know where the list comes from. I don’t know what the objects signify. But there’s a little voice inside this body that keeps repeating it over and over again like a tag line in a story.

I contemplate the possibility of brain damage and then realize there’s nothing to contemplate. I’m dead. Maybe I’m watching what is probably the last slide show my mind will ever provide.

I decide to enjoy it, until a boy walks by. He holds a pocket watch to my face. I ask him if he’s the timekeeper. He says, “Your biological clock. And you have to be back in fifteen minutes.”

Fifteen minutes, that’s all I have. And the list, the only discernible element of my existence is yet to be found. I continue walking, hoping to find that beer, a tent, some candy, something to remind me of who I am. Instead I find a garden with a ditch. I jump in it and notice three little white dogs sniffing around it. They’re small terrier-like breeds with pointy ears, dark eyes, and charcoal black noses. I try to pick the chubbiest one up but she takes a step back and sits and says, “No,” waving her paw in front of her.

The little dog says she knows. Otherwise she wouldn’t be talking, you little nitwit. I ask her to help me but she says she can’t. So I start crying and crying not knowing where the tears are coming from. I cry so much I drown myself in my own tears.

Suddenly I feel something pull my hair, three little sets of teeth, the three little white dogs. They drag me out of the water and I gasp taking in all the air I possibly can, surprised that I can do it.

I breathe again and let a wave of memories rush through my head. I’m concentrating. The washing up liquid: cold water on my hands. The sneakers: the thrill of running, trying to taste the air as it enters my lungs. I imagine the tent and the sense of safety in a wild world where all I need is room to get lost in my thoughts. I imagine applying hair gel and massaging my scalp – that skin lining that covers my sacred madness, the control room of who I am…

“Stop it!” the chubby dog says as she slaps me.

“You’re not making any sense now. And look, your heart is beating and it has to stop.”

“It’s time to go back,” the boy with the pocket watch says as he runs by.

The dog is right. It has to stop. I’m dead and dead people don’t have a heartbeat.

I get up and start running to the mortuary, panting, out of breath. I’m sweating as I climb back in through the window, lie down on the table and pull the sheet back over me.

My heart’s beating faster. My breathing is heavy. If I don’t stop she’s going to doubt my death.

Lying on the metal table with the sheet over me, I hear her. When she walks in the room, I try to hold my breath. She moves me, pokes my arms, then my legs. I need to breathe. Very slowly I take in a tiny, apprehensive breath, trying not to move my chest, repeating, “I’m dead, I’m dead, I’m dead,” in my head.

“I told you she was dead,” she says glowering. Again, I’m not listening. But she looks down at me menacingly. I can feel it. I really can.

Then I feel her pinch my arm and the blood starts rushing through my body with anger. I can feel my ears getting hot and my voice racing loudly up my throat.

She says she doesn’t understand pretend. That it’s a dumb word. “You’re supposed to be dead,” she says. Then her voice deepens, “Deprived of life.”

I wrap the sheet around me and jump off the table. I walk out the front door this time, still trying to figure out what the hell I need dishwashing liquid for.

Sharon Mertins was born out of a spark of imagination somewhere underneath the deep Guatemalan sky. She lost her pixie ears at a very young age and it was her enduring pursuit to find them again that veered her into a life of endless word slinging.
She is now based in Berlin, where she has mastered the art of dreaming and knitting strands of thoughts together, trying to make sense of them by turning them into elaborate tales. The Night I Died is the first one to be released out into the world.