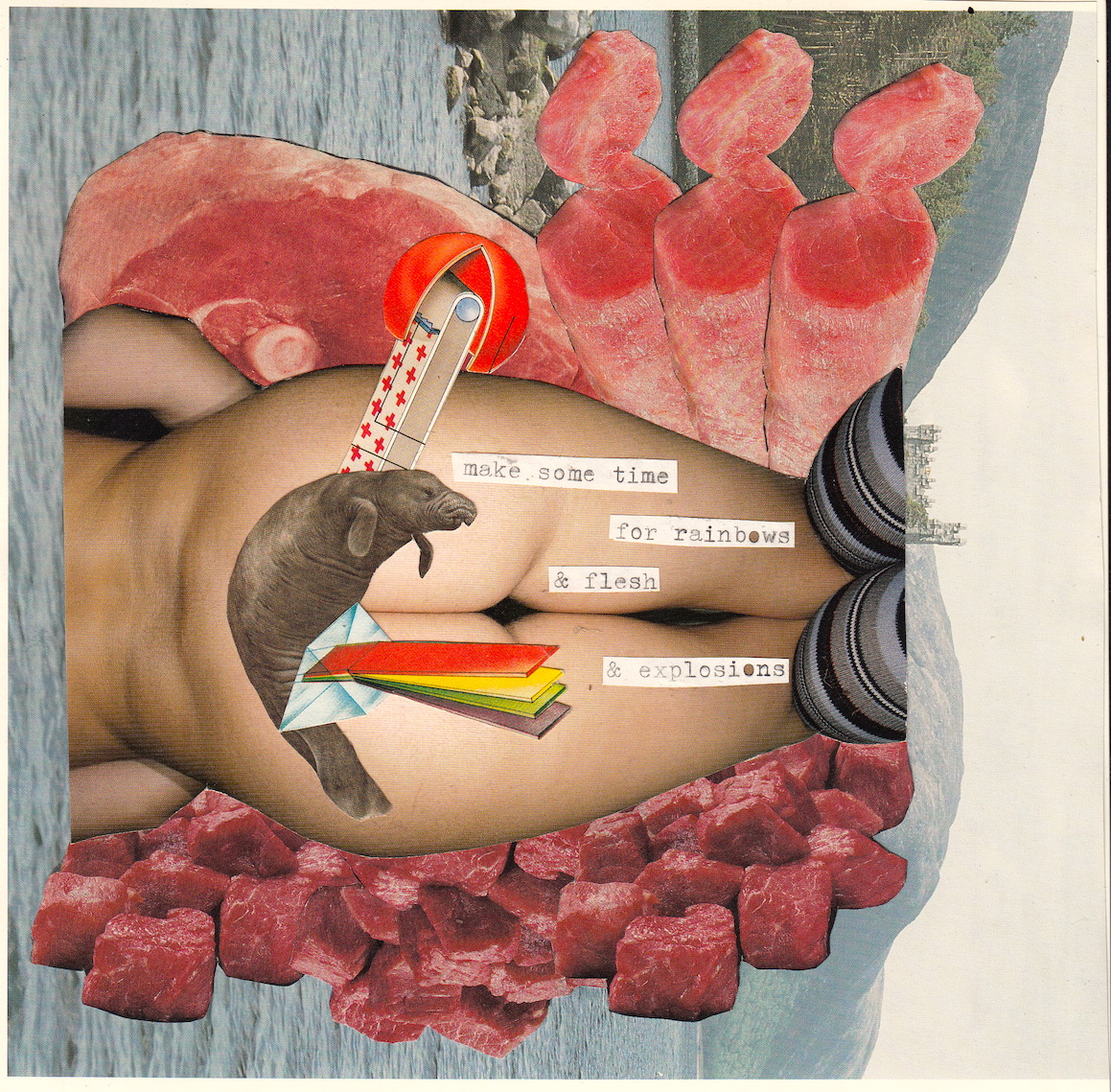 Once upon a time, there was a manatee that lived far below the waves in the deepest and bubbliest part of the ocean. The manatee was frequently mistaken for a beautiful mermaid by sailors, because the sailors round those parts were rum-spattered lushes who were more likely to identify as pirates. The sailors had been known to drop a tab of acid before the first wave of the day rose up from the wriggling mass of water, and try to steer the ship like a bowling ball into the sea’s great ten-pins (which, it has to be said, never ended well).

The manatee, whose name was Cindy, didn’t mind being mistaken for a mermaid, even though the acid tended to make the sex distracted and somewhat directionless. For instance, she always liked the bit when the sailors held her by the fin and told her she was as beautiful as a dozen Chinese dragons, and she liked the gurgle in their throats as they realised that they couldn’t breathe down there, the gurgle and the hiccup that said “bye bye sailor!”

Besides, Cindy thought she deserved something nice, even though there was a little nagging feminist knot in her gut that said maybe it wasn’t very nice to trick drunk people into making out, even if they were men and even if they couldn’t tell the difference between mermaids and manatees and even if they ended up dead.

In this deepest and bubbliest part of the ocean, the end of the year was approaching, and with it, the holiday season. Cindy had decided—had made a promise to herself, in fact—that she was going to spend it right this year. Cindy was not a Christian, but she did like to pilfer holidays from other religions and had, in the past weeks, already celebrated Krampusnacht and the Fiesta of our Lady of Guadeloupe and the Day of the Birth of the Unconquered Sun. There had been a mini parade with subaquatic ticker tape and crepe-paper virgins, and a sexy Krampus date with birch-rod spankings and shots of Schnapps, but there had not, yet, been the unique delight of Christmas for One—since, as anyone who has ever listened to the Waitresses will know, “spending it right this year” is a euphemism for telling the whole world to fuck off so you can have a private holiday with a single-serve turkey and a lovely Hitachi friend.

See, our Cindy was very, very bad at saying no to things and, truth be told, at the end of this year, this year of sailor-sex parties and seahorse haiku and touring the oceans with her world-famous riot-manatee project, the one thing she hadn’t made time for was the meeting of manatee fin and manatee cunt.

So her gift to herself this festive time was the gift of no-thank-you-everyone, see-you-next-year-everyone, can’t-quite-make-it, things-to-do!

Cindy had been planning this for months. She had been practicing her No face, practicing her No words, practicing the art of the decline in which Cindy intended to shake her sexy manatee head from side to side, nuh-uh-uh, and disappear in a hive of bubbles before the asker had time to work out just what the hell happened there.

So. It was Christmas Eve night and Cindy was tucked up in bed, dreaming wet bubbly manatee dreams about tomorrow, when she had a seven-course wank planned: wank canapés and wank soup and deboned wank-inside-a-wank, some wank fondant sides and a baked wank surprise for afters, and maybe a cheese board too, because Cindy really liked cheese. Any minute now, her alarm would go off and she would awaken to a day of glorious, glorious selfishness where she would discover the magic of Christmas and fulfil every one of her heart’s desires.

But but butt. There is always a but.

It was the midst of the cheese board and Cindy was just placing a cube of nine-month oak-aged Comte on her tongue when a noise rudely barged inside the dream and punched her on the nose. Instead of waking to the carefully programmed, best-of-Dolly-Parton Christmas mixtape, she awoke to Delilah leaning over her bed squealing and brandishing a wicker basket.

“I know,” said Delilah, “that you’re very busy today, and I wasn’t going to come round, but look!” and she whipped the dishtowel off the basket to reveal eight baby seahorses, wriggling and blowing bubbles and splashing rather delightfully indeed.

Well, Cindy had to admit that they were quite cute. Their fins were made of pink and turquoise glitter and—were those tiny diamante tiaras on their heads? Adorable!

“They’re magical Christmas seahorse babies,” said Delilah. “Tomorrow, they’ll all be dead, so I figured you’d want to play with them while you had the chance.”

“That’s very kind,” said Cindy, so she sat down with Delilah and they taught the baby seahorses to leap over tiny jumps and water features, then they ate a whole box of Ritz crackers, and then Delilah had to go.

Still, it was only two o’clock. Plenty of time to get back to her day. So Cindy lay down on her bed and closed her eyes and picked up the octopus tentacle back massager and was just about to get to work, when:

She opened her eyes. It was the ghost of one of the dead sailors looming over her, a jaunty hat slightly askew on his head and a massive erection in his right fist.

“Listen, I’m kind of busy,” said Cindy. “Could you come back tomorrow?”

“Ah, come on! You did kill me,” said the ghost sailor. “The least you could do is give me a final blow job.”

Cindy wasn’t quite sure of the logic there, but figured an argument about LSD’s effects on subaquatic breathing techniques would take longer than that blow job. Besides, she did actually quite enjoy giving blow jobs, that was the thing (not to mention the fact that she harboured a deep-seated fetish for sailor hats gone askew), so she took the ghost sailor penis in her mouth and hummed seventeen verses of an ancient undersea melody until he ejaculated his ghost sailor sperm in the back of her throat, and disappeared in a million tiny bubbles, leaving Cindy gloriously alone.

And she jerked her hand away and opened her eyes to see a microphone being thrust right under her snout.

“Hallo, Channel Eleven is in the house! I’ve come to do a Christmas TV special on you. That’s right, you!” said the reporter. “We simply cannot go another whole year without the world knowing you’re a star!”

Cindy didn’t want to be rude, and besides, she would quite like the world to know she was a star, that was the thing. So they filmed her playing her latest synth-pop keytar hit single and they interviewed her about her eating habits and her sex habits and her favourite colours, and then Channel Eleven swam off, blowing a dozen kisses in their wake.

By now, Cindy was beginning to feel just a little bit depressed. It was the curse of living in the deepest and bubbliest part of the ocean, a part of the ocean where there were no doors and anyone could come right up to your bed and interrupt your wank with something better to do.

And, she supposed a little sadly, it was the curse of having too many friends and too many cuties and too many projects, which was a dreadful thing to complain about, so she couldn’t even enjoy the complaining—couldn’t even say it out loud, really, without feeling like an absolute brat.

“Listen,” said Cindy. “If there is truly a Magic Christmas Santa Genie up there, could you please just grant me this little wish? If I could just have one evening to myself to knock one out, I’ll never ask you for anything ever again.”

And then, like an answer and a gift and a promise—KABOOM!—a massive explosion rocked the ocean. Cindy looked up, just in time to see a swarm of disembodied limbs raining down into the water, thrashing around like judgemental bumblebees. And, behind them, sinking at a rate of knots: the carcass of a cruise ship, parting the ocean like Moses. She watched as the ship catapulted into the seabed with an almighty thud, reared up a little, and settled back down.

She closed her eyes very tightly and then opened them again. It was still there.

It was a miracle! A Christmas miracle. A special gift from Magic Christmas Santa Genie, for those who truly believe.

Cindy did not need asking twice. She swam as fast as she could to the ship; she tapped the shell of the hull all over with the tip of her snout, until she found a place that gave way and she could squeeze inside. With a slither of her hips and a grin that could burst a zeppelin, she made her way inside, into a small cavern of the ship, and she nudged the door closed behind her.

It was beautiful. Even down here, in the deepest and bubbliest part of the ocean, sunlight streamed in through the tiny portholes, making beams that played on her body like spotlights (which Cindy enjoyed, because she was a bit of an exhibitionist). In fact, if she squinted, she could almost pretend the dead bodies littering the room were a crowd of cheering spectators, encouraging her to get to where it was she was going.

So Cindy lay down amongst the corpses and, after checking the door one last time to make sure it wouldn’t open, she moved her fin gently between her thighs (or where her thighs would be if she had thighs, which she didn’t, because she was a manatee) and she started to rub.

And, as the water around her turned a dreamy, romantic pink from the leaking blood of all the ex-passengers, Cindy brought herself to orgasm seventeen times in a row. In that humble cruise ship room, Cindy discovered the true meaning of Christmas, and forgave everyone everything, and then she got up and made herself a cheese board, before going back to bed.

Jane is an over-excitable pervert with a penchant for ridiculous metaphors and glitter. She’s won various awards, including Salt’s Best British Poetry (2012) and Wigleaf’s Top 50 (Very) Short Fictions (2014), but she’s still waiting to be presented with her honorary tiara and tankard of gin. When Jane’s not writing, she likes to play cello with Ambika in the riot grrl band Razor Cunts, teach creative writing courses through The Reader Berlin, run festivals, host queer events, and rollerskate down Tempelhof runways in hotpants.
http://janeflett.com