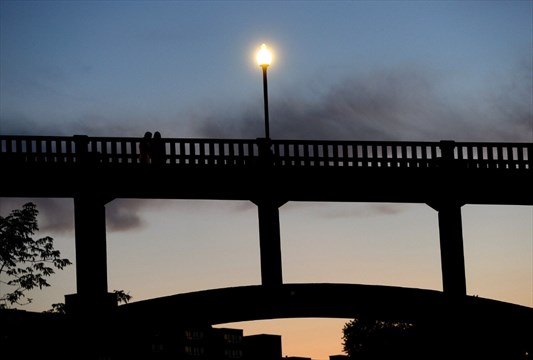 Last night, I left my house to meet a friend. It was beautiful outside—warmer than I expected—and all the lights along my street were haloed with mist. After a day indoors, the fresh air was sweet and good in my lungs, so I turned up my music, started down the sidewalk, and tried to keep two metres away from anyone I passed.

When I first moved to Guelph, it was a city where people ran into one another. Even as a newcomer, it didn’t take long to spot familiar faces in bars, busses, and the windows of restaurants. Long before I carried a phone everywhere, I knew that if I wanted to hunt down some friends, I could always drop by the Albion patio, or weave my way through Jimmy Jazz. The city has changed a lot in the last twenty years, but unlike so many places, it still has a centre: a beating heart of a downtown that always felt like an extension of my own neighbourhood.

When I met up with Mike and his dog, Bark Ruffalo, we didn’t bump elbows or bow or whatever we’re supposed to do these days; we just reviewed the latest ground rules: “You take the sidewalk,” Mike said. “I’ll stick to the road.”

There’s a kind of innocuous thrill that comes with walking around a city under quarantine; the empty streets seem to pulse with gentle menace. We all know there’s a minotaur in this maze, but odds are we won’t cross its path.

In the little bend of Extra Street’s elbow, something growled at us from a darkened porch. Mike yanked Bark Ruffalo in the opposite direction, while the owners scrambled to corral their dog.

“They call that ‘barrier aggression’,” I heard one of them say.

We kept going, past the hopeful light of self-isolators that burned in every window. We stopped once outside a friend’s place to drop off some food. He waved at us through the window, but didn’t open his gate. Eventually, Mike and I opted for a quieter artery—the way I used to walk to work: down Norwich Street hill, across the railroad tracks, and past the corner-cut house that was once a convenience store. We headed east and went by a friend’s duplex, and the squat rental where my partner Sarah used to live. There was something comforting about being surrounded by all that banal history when the future was so uncertain. We crossed Eramosa and continued along the cozy jumble of houses that crowded the riverbank. Mike suggested we take the Heffernan Street Bridge, and I stopped, suddenly surprised when something inside me resisted.

“I love this old foot bridge,” he said.

And I did, too—the curve of its concrete, the lamps reflecting in dark water, and the glow of downtown beyond—but that night, the bridge felt like something else: a portal that took us from our sleepy neighbourhoods and dropped us into the heart of the maze. The place where people ran into one another.

I don’t know how wide the Heffernan Street Bridge is, but it’s definitely less than two metres. As I followed Mike, I tried to keep my distance, but soon a man loomed toward us, backlit by the city. I held my breath, and in a silent, slow-motion game of keep-away, we navigated our bodies around each other.

At some point it started to rain, and when we got to the other side, the temperature had dropped. Up close, the lights of the city looked yellow and hard. The stores were shuttered by then—some indefinitely—but the ones that would open in the morning had posted strict new rules for shoppers. Gloves. Sanitizer. A line through a circled hand.

Mike, braver than I am, wanted to cut through the downtown core and see our city as a ghost of itself, but I said we should skirt the perimeter instead. The people we passed didn’t look me in the eye, but I could feel them watching me when I coughed into my arm. At a stoplight, a black sports car snarled its engine. We walked through the rainy glare of its headlights, and I wanted to go home.

Once, when we younger, Mike and I cut across the empty CNE midway after hours. We walked past the airbrushed haunted house and climbed over the carnival equipment. The place was cartoonishly sinister—the villain’s secret lair in every comic book—but still we stumbled through, laughing and fearless. Now, I wonder when I’ll feel that way again.

Mike and I parted company on Dublin. As he and Bark made their way down the street, he shouted something back to me, but I didn’t hear it. I don’t remember the route I took. I don’t remember if I passed by my old house, or if I walked through the crooked charm of McTague Street. What I do remember is looking down the wet, empty asphalt ahead and realizing that I was the only one foolish enough to be out in this weather.

In the cold, my body buzzed with possible symptoms. The closer I got to home, the more I wondered if I had met the minotaur, after all. Maybe I was bringing it back with me to lie down next to my sleeping children. Maybe I was the monster, now.

And then, walking past Exhibition Park, I was surprised to hear the singsong of voices.

“Not it!” called another.

From deep in the moonless night came the sounds of furtive movement and breathless laughter. Somewhere, kids were playing tag in the rain. I couldn’t see them, but I could picture them. Hunting their friends. Reaching out through darkness. Running into one another.

Greg Rhyno’s debut novel To Me You Seem Giant is available from NeWest Press. His writing has appeared in PRISM International, Hobart, and Riddle Fence. He recently completed an MFA at the University of Guelph and currently spends most of his time indoors.