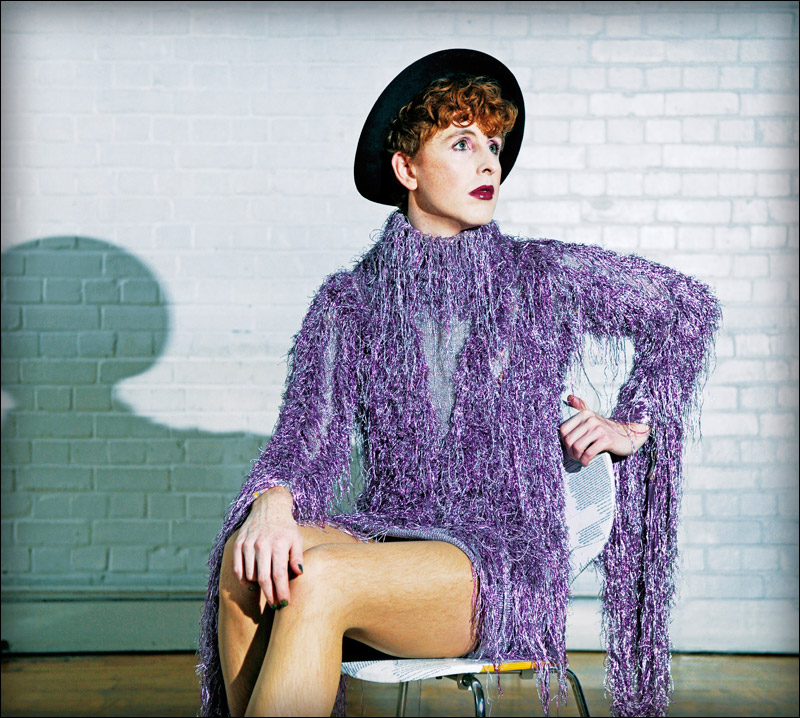 December’s guest writer was La JohnJoseph and we were lucky enough to publish a chapter from their novel Everything Must Go, which came out in 2014 with ITNA Press. The chapter Charlie – which you can read here if you haven’t already – whirls along a surreal German Autobahn to the beat of a fantastical love affair with Charlie Chaplin amidst a sea of other beautifully wild and sometimes disturbing experiences. La JohnJoseph, if you’re not familiar with them, is a multi-talented human being with their hands in several artistic pies (theatre, music, etc.) that are all delightfully delicious. Our poetry editor, Jane, was able to catch up with La JohnJoseph and get a little more insight into the “making of” Everything Must Go, which you can order through ITNA Press here.

Everything Must Go is full of idols: Rudolph Valentino, the Mae West cyborg, Saint Francesca (!), and of course, Charlie Chaplin. How do icons inspire your work?

I work with icons because they are shorthand for complex narratives and so preloaded with meanings one can manipulate. Theologically that’s what the function of an icon was, to express dense religiophilosophical ideas in a manner comprehensible to the illiterate. More so an icon was believed to be not merely representative of a particular saint or deity, but rather to actually be that being. Obviously inserting those icons into the text causes riotous chain reactions. I grew up Catholic and very much entranced by the almost pagan idea of patron saints, and later saw how those compressed archetypes had been transferred on to movie stars and brand names. Icons (both secular and religious) have remained so important to me because there’s something wonderfully optimistic in the shared understanding we have of, say Greta Garbo or a can of Coke. They are such loaded symbols which we store so much common knowledge in. And of course it’s terribly camp, because it’s so reductive, people only become iconic after they’ve become 2D caricatures of themselves. Additionally of course when you interrupt or rewrite the function of a character you’re challenging the apparent fixity of meaning, and maybe even ridiculing it, which is always a good thing.

Actually the publishers who saw it were more afraid of the form than the content. Until ITNA Press saw it I had an endless stream of people telling me that it was a great piece of writing, but unpublishable as a novel. It was as if they’d never read Genet, Acker or Burroughs – quite an insight into the minds of those who curate the literary world.

It also reads, in some ways, like a classic adventure story—full of fantasy and magic. Can you tell us a bit about the books you enjoyed as a child?

Most definitely it’s a fantasy fiction novel, yes! My mother read books like Lord of the Rings, and The Sword of Shanara, almost exclusively when I was a child, and I read them straight after her. The quest novel format is in a way a skeleton to hang all of these outrageous images on, as much as a narrative structure. And of course it builds to a huge anticlimax, so by the end I’m clearly satirising the genre. There’s also a huge influence on the book from cartoons like Ren&Stimpy, Sponge Bob, and The Amazing World of Gumball. I love how images can morph in cartoons from the frothy to the horrifying at such absurd speed.

It seems like you’re doing a million different projects at once: a world-touring band, critically acclaimed theatre shows, writing for a bunch of major newspapers and all over the internet… How did you find the time to write a novel too? (note: I’m basically just asking this question because I want to hear you talk about Blackpool, because you going to Blackpool to write a book fascinates me).

I wrote the book pretty swiftly and quite organically, I had been carrying it around in my head for sometime, and I suppose had simply reached saturation point when my waters broke and it suddenly emerged. Whilst not strictly autobiographical, most of the episodes in the book did actually happen, it’s a psychedelicized memoir you might say. One day I’ll footnote it all and let people decipher the real story behind it all! My family home is in Blackpool, and I was holed up there for a few cold months, writing all night and watching Fassbinder movies all day. It seems a fitting place to have written this book, the title Everything Must Go, actually comes from all the rubbishy shops up there which are permanently having a “going out of business” sale. I thought of the book, as I was writing it, as both a clearance sale of literary bric-a-brac and cultural tropes, and also a warped continuation of them. It’s a real moment of, “The King is dead! Long live the King!”

Currently I’m on set, filming Shu Lea Cheung’s new feature, “Fluid 0”. Never a dull moment. Outside of that I’m devising a new theatre show based on the life and music of my identical twin brother, Alexander Geist, and revising my satirical solo show, “Practically Royalty” with a view to the Edinburgh festival this summer. I’m also preparing to perform in Japan for the first time next month too. Oh and walking my dog, Cupid too.