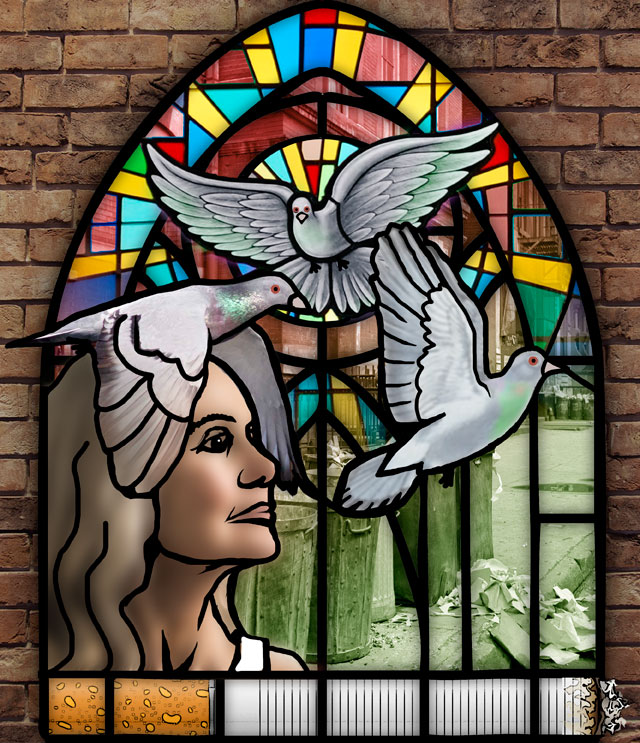 Ava watched a city bus accelerate toward three clucking pigeons in the middle of the road. Their nonchalant pecking at the asphalt right up to the last nanosecond before total obliteration thrilled her. She gasped, and all three took flight, scattering to the right and left of the massive bus fenders, two landing in the gutter beside her. She rested the side of her face on the hot concrete, and a sharp pebble dug at her cheekbone.

Her eyeballs lolled, searching for the third pigeon across the street, and then followed its arching, graceful flight over to join its friends.

The bird shook aggressively, transformed into a regal fluff ball, then relaxed. The other pigeon strutted back and forth, straining its breast to show off its oil-slick purple and dragon green. The last one raced in circles, hopping up onto the curb and then back into the gutter on each go-around, clowning, scrapping for food.

She admired the pigeons. They survived better on the street than anyone. Pigeons could take flight like no other bird. They had a natural talent for thrust, could lift off with no running start.
She wanted to hatch into her most sidewalk-tough self like those birds. She had been practicing since she got caught in the tree house with Eileen and her parents threw her out over it. After that, she had hitchhiked and given hand jobs at a rest stop and then blow jobs behind a gas station. Finally, she earned enough money for a bus ticket out here to the Emerald City. Pigeons had accompanied her throughout her lonely-yet-hopeful ride, perched along all the power lines, loitering in parking lots, showing her how to get by.

Hootie flopped down on the sidewalk beside her, all ruffled and proud, like the pigeons. “Look what I got.”

He flashed a soggy cigarette in his a pale, open palm.

“Yep, my lucky day. Can I leave it here in the sun with you while I finish my rounds?”

Hootie stood up. “You’re looking a little gray. Been in there lately?” He gestured with his scraggly chin at the red-brick clinic building that loomed above them.

“Naw.” She didn’t like going in there too much, even though she needed to for meds. “They always got bad news,” she told him.

Hootie rolled his eyes, round and crimson-lined. Then he swung his boot to kick the birds.

“Hey!” Ava shouted up at him from the sidewalk. “Do you want me to watch your cigarette or not?”

“You like pigeons too much. Rats with wings carry diseases,” Hootie said.

Hootie left, and she returned to bird watching. She reached a crooked finger out to them, wishing one would hop up onto it. The birds fluttered up the brick clinic wall to a windowsill, and one edged along the open glass.

She hoped it wouldn’t go inside the clinic. Pigeons could get confused and panicky and easily kill themselves trying to get out. She had seen it happen before. She held her breath, watching. She tried with her mind to tell the pigeon not to go in, but it did.

She rolled off the curb to a crawl, and then a crouch, and finally stood to follow the bird. Hootie would say she owed him a cigarette, but she didn’t care.

She staggered through the automated clinic doors, which swished open for her and closed behind her. Inside, the smooth linoleum caressed her calloused feet, and the air chilled her bare shoulders. She didn’t see the pigeon anywhere.

Ava spread her arms and flew down the white hallway until she heard someone coming and hid in one of the rooms. While she was in there, she looked for the pigeon and caught a glimpse of herself in a mirror on the back of the door.

Big chunks of her hair had fallen out since she’d last seen her reflection, leaving the whole front of her scalp above her forehead exposed and ruddy looking. Her sunburnt face had not finished peeling from the dry, windy days last week. She looked like a molting, sick bird.

“I’m glad to see you!” It was her social worker. “Do you have an appointment?”

“Or just here to pick up meds?”

“Sit here,” the social worker said, offering her a metal chair and taking a seat at the adjacent desk. “This is for you.” She handed Ava a Ziploc bag.

Ava clutched her gift and fidgeted in the military chair.

“Tell you what,” the social worker said. She placed a shiny, red-plastic card on the untidy desk. “You go down the hall and see the nurse, and then come back here, and you can have this Mickey Dees voucher.”

“French fries, then. Maybe a milkshake.”

Ava counted the white plastic tubes in the bag.

The social worker pushed another one across the desk. “You want some sunscreen?” The little tube rolled in between two paper piles, one yellow, one pink. “It’s hot out. I have extra.”

Behind the social worker, above leafy potted ivy and striped spider plants, through a muddy window-pane, Ava could see the bird she’d been chasing. It was free, outside with its friends again.

“Okay,” Ava said and stood up.

The three pigeons fussed and preened on the windowsill, gargling throaty coos and singing twirly songs. They took flight, and Ava started down the hall to see the nurse.

Kristy Lin Billuni, AKA The Sexy Grammarian, is a writer and teacher in San Francisco. Her stories appear in Fiction War, Flash Fiction, and Flash Frontier Magazines and in anthologies from Cleis Press and Mofo Pubs. She has maintained a mostly weekly blog since 2003 and contributed dozens of essays to Fiera, a sexual health blog.

Flannery Bateman is a nice lady living with her animal family on an island in the Bay Area. She enjoys the occasional freelance design or illustration but mostly spends her rare and precious time reorganizing the basement so she can get back into bookworks. It’s almost done. www.pretendpress.com