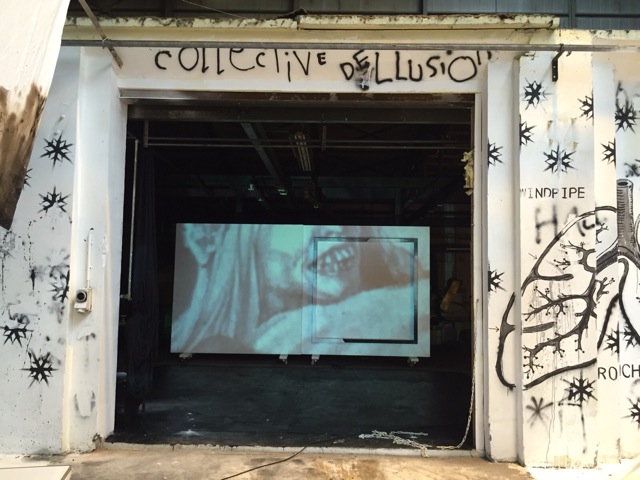 You begin in a catholic country. Unchristened, you are the offspring of unorthodox parents who fled the worship. There you are, sat at your chipped enamel desk, wearing your blue apron. Crucifix on the wall, aimed at exactly the space between your eyes, primary school. Your eyes rest on the midnight hue of Valentina’s back and she turns to face you with the milk-puffed movements of a child.

“You were not baptized?”

Two inquisitive chestnuts fix themselves on the embroidered collar of your uniform.

“You will go to hell,” her little voice chirps on a higher note.

You glance at the uncorrupted whiteness of her pillowy face, again. In your doll-sized pockets, tiny pink fingernails press into flesh, aware that even a tentative scratch could crease her candid oblivion, and you would be dignified. Christ less.

You grow, an impenitent, soft-spiked cactus. Pre-adolescent and unperturbed, you begin to notice the news. On the television and magazines, a bearded potato-face man salutes you. Padre Pio’s wounds are the same as Jesus, and violets permeate the air to announce his resurrections. You pick up those magazines, and photographs of unhealed wounds creep to your eye sockets. Devotion. Madonna. Stigmata. They saw the light! Tiny bleeding figurines swim in your melon-sized cranium. White veil and a cerulean blue cloak wears Mary.

Night comes, and once dark, you begin to believe that the statue will visit you, straying from one of her pilgrimages to those dried-up Italian villages. To rooms blinded by shutters, where a tacit old lady sits in the company of tarnished wardrobes and icons of those who have left her. Chilled as a marble in the enveloping heat, she waits for a visit to the cool static cube of her home. 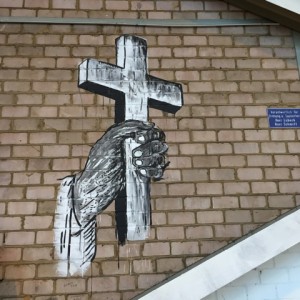 You swish into bed each night and you press your gingerbread hands and bony feet together, praying a non-prayer. Repetition commences as you inspect your limbs regularly to avoid an unbeknownst crucifixion. Silenced by a fear you won’t share, you punctually dread the visit and the wounds. Days fluctuate their course, but nights mimic each other as you repeat the same act, for years.

Puberty crawls on your frame, and you overlook your nightly rhythmics, as it becomes second nature. Elsewhere absorbed, you never mention your habit. On a nondescript day your nose starts to bleed, copiously. It continues, spaced only by brisk, clotted intervals.

You decide to visit the hospital.

“Pinch your nostrils and hold,” the doctor instructs, “until it stops.”

You reenact as instructed, promptly answering your nose’s call to coagulation each time it beckons.

One day the gore continues to seep, unstaunched. You pinch, you pinch, you pinch and hold, but the hemorrhage doesn’t listen. You run to your bathroom and you timidly peek at the mirror above the sink, with smeared vision. Steamed by your breath, the glass clears and finally there, you see her.

No gilded crown, her blue cloak is crumpled and patterned with blood crusts and tossed to the floor. Two trickles of blood stroll from your eyelids like tears, striping your cheeks like festive face paint. Weak-kneed from your own reflection and the blood loss, you stagger down steps and hail a taxi to the hospital. Face cushioned with toilet paper, two more rolls in your handbag.

“You had an epistaxis, the emissions from your eyes were simply a consequence of heavy bleeding from your nostril,” explains the doctor, having already cauterized the leaking vein.

Back at home, you switch on the lights and removing your shoes, you dissolve on the sofa like dewy water. Only your face stays stiff. A thick wedge of latex now snuggles your nasal cavity. The temporal absence of motion kicks your mind into wonder and you are stupefied by your missed intuition.

You drift into sleep opaquely. Hands and feet spread, fingers and toes audacious and elongated, you lie as a dormant colossus. Nocturnal blooms, the ridges in your palms curve in a gradual motion. They smile at the ceiling, and at Valentina.

Allegra Franziska Lipanje originates from a small town in Italy called Trieste. She has spent the last 10 years living in London, Brussels, and now strolls the streets of Berlin. She holds a B.A. in History of Art from Goldsmiths University, London and is currently spending her time teaching, blogging and compiling a multi-cultural fantasy children’s book on the subject of ethnic minorities.