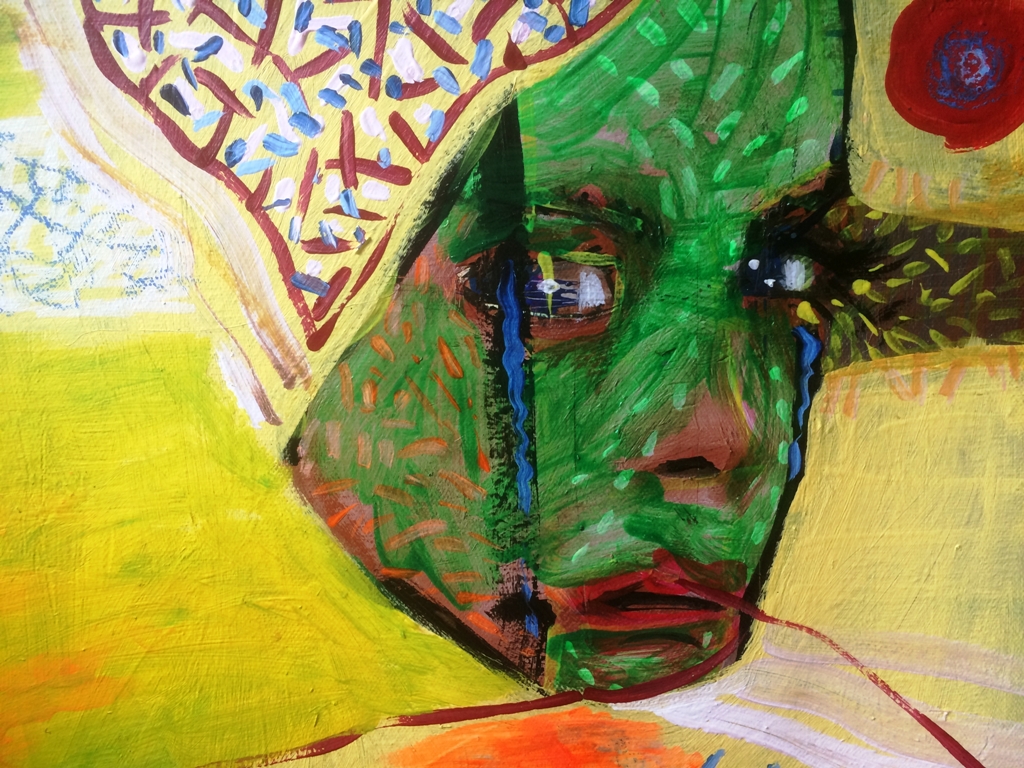 I used to live in a haunted apartment, and what can I say, it didn’t go well. The apartment was an evil place, which I figured out pretty quickly. Cold corners, slamming doors, walls that bled and whining children’s voices in the night. Sleep wasn’t an option and even the milk in the fridge turned sour. The living biomass in the dead-soul-zone provided plenty of suspense. There was negative energy everywhere, and as an illegal lodger I couldn’t even try and fight for a rent reduction.

In the beginning I merely wondered about the electrical rustling in the air and the metallic knocking of the heater. I sat on the toilet and just stared at the burning cross where the bathroom floor tiles met. I quickly surrendered to my fate, I’ve never been a fighter from the start, and began to talk to the ghosts. In the mornings I would greet them with inappropriate merriment. “Hello ghosts!” I said and narrated my daily routine for them. “Now I’m making a coffee,” I’d tell them, or: “I’m cutting my toenails. They’re gonna put runs in my stockings.”

My attentions didn’t mollify the ghosts. Quite the contrary, they were probably only ever looking for an audience. They rumbled, haunted and whistled through the rooms all day. A “Hui” here, a “Buh” there. Basically, the whole routine was rather disappointing when I compared it with the horror films of my youth, but still it caused me a great deal of unease.

Unlike my normal routine, I left the apartment one evening and walked through the city. It was a lovely spring night. I crossed Oranienplatz, past the supermarket and over the spot where the Refugee Camp stood a few months before. Now it was cleared away leaving only the memory on the yellow pebbles in its place. I kept going, direction water, along the bank, to the weeping willows. In the darkness rats rustled in the privet hedges and a sporty man jogged by with a headlamp strapped to his face like a cave explorer–straight into the Labyrinth of Moloch. At some point I decided I couldn’t carry on forever. Until that point I had let myself be guided by the course of the canal. I had followed it along its edge, which broke off in places, crumbled, and surrendered to the water. Berlin is known to be built on sand.

Back in the apartment a ghosting par excellence awaited me. Cups exploded from the table, the lights flickered in a strobing rhythm, the spine-chilling voices pushed out of every drain, and the shag carpet moved like a tired dog through the room. The walls groaned, and the floor split and blood flowed out. I thought of the damage deposit and cursed, “What do you want, you damned dead?” But as expected, no answer came. I pushed the bed into a warm corner in the bedroom, crawled under the blanket and tried to hide from the paranormal activities. That didn’t suit the ghosts. They moved on to me. Pestered me. They shook the frame, and threw lightning balls about the room.

Under my protective down sheathing I bounced options back and forth in my head about what to do. It was late in the night and there was nothing I could do and nobody I could go to. I was not socially integrated, despite my many years of struggle in the city. My life did not follow any form. There were no conditions in which I moved, rather incidents and misfortunes. There were mornings when I woke up so beside myself that even after a few hours I still couldn’t remember my name. If I recalled it, I would quickly write it down, but by evening I would think it so ridiculous that I would throw away the piece of paper until again I was nameless and so on. I was trapped in my own identity gap.

Sometimes I tried to find the gaze of an other that would offer me some meaning. But it was exhausting to wander through the nights and the streets, to drink or take pills until I met a woman or a man, or a person, who was deprived of the attribution of her genitals. To have sex with them, to stay with them till the break of dawn and forget their names plus my own.

The rattling of the cabinets tore me out of my rumination. I tried to make something beautiful flourish in my brain. The positive materiality of my thoughts could perhaps conquer the evil spirits. But I couldn’t. My brain was like a cotton ball that swallowed everything and so I stayed with the ghosts throughout the night.

The next morning, the spirits were gone or had gone to ghost sleep, so I hurried to the animal shelter to get a cat. I told myself a living creature in the apartment would outnumber the dead. The poor animal, however, sat only in the corner and hissed in all directions. The cat’s eyes were wide open, the little vampire teeth ready to bite. For two days I let the cat scream and scratch. It hated me and probably wished for the dull safety of the animal’s shelter. As I opened the door to do my weekly shopping, it rushed past me, into the dark corridor, and disappeared.

I was alone again with the spooks and now it felt even more frightening than before. So I ordered a TV online and stared at it from morning until late at night. Talkshows, news, soap operas, Hollywood tear jerkers, Rom-Coms, Sci-Fi. None of it penetrated, but it was a distraction machine that did its service. Somehow I stopped thinking and doing. I didn’t eat anymore, I no longer drank and didn’t even need to pee. I was just as dead as the ghosts. I did “Hui” and “Buh” and one morning I found myself in the hallway. Lying, pale-faced and wide-eyed. I shook myself a little, kicked my stomach, but nothing moved. My body soon exuded a terrible stench and crumbled into a brown, sticky mucus. The stains would never get out of the carpet, but that didn’t interest me. I haunted the ghost apartment and realised that with the absence of time the world became bearable.

Clarissa Lempp lives in Berlin and has a Masters in Gender Studies. Nowadays she teaches German and writes stories about ghosts and other entities, because life can be spooky.

Mario Büger is a painter. He is based in Berlin.

Ambika Thompson is a writer, musician, and parent who loves to dance like it’s 1979. She’s contributed her own short stories to NPR Berlin, Fanzine, Missing Slate, Plenitude, Litro and Electric Literature’s Okey-Pankey. But what she really wants is to one day win the Nobel Peace Prize for being a stand-up comedian. For real though, she is playing cello and drums with the poetry editor, Jane, in the riot grrl band Razor Cunts, and is currently an MFA candidate in creative writing at Guelph University.
ambikathompson.com