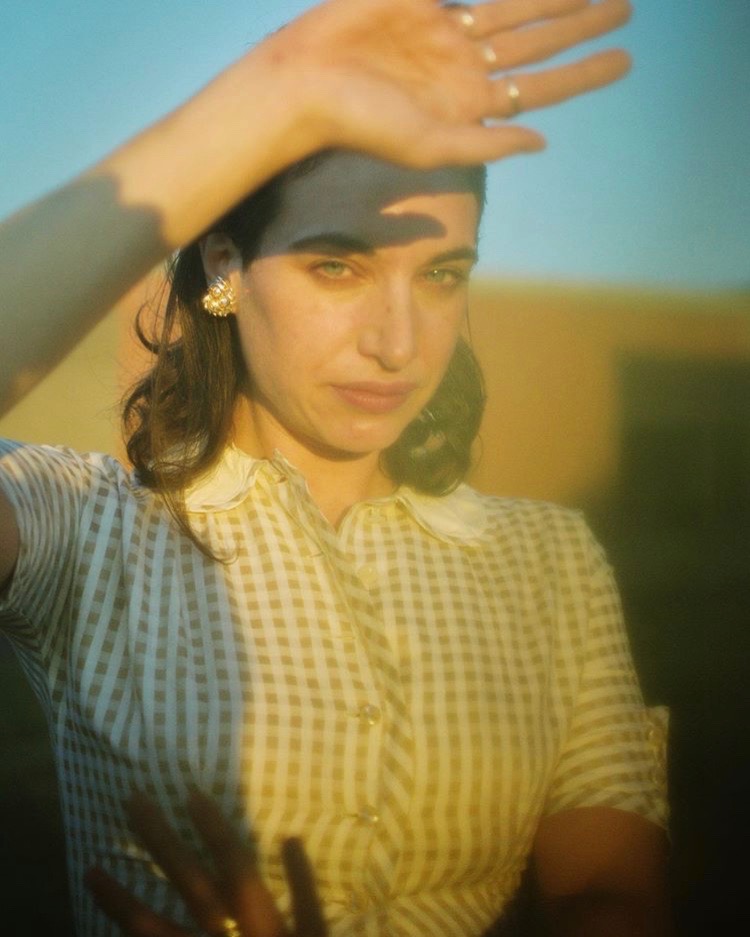 Ma was the first to ascend, and by then she was no longer herself.

It started with her sobbing in the middle of the night. I would huddle under my blankets and silently beg her to stop. She cried out for Pa. I knew Simon heard her because he came out of his room every morning looking withered.

“People grieve in different ways,” my therapist said, before I stopped seeing him. I assumed Ma’s strange behavior was grief over Pa’s death.

Then Ma revealed to me that she could not see herself in the mirror.

We were standing in the living room.

Ma stared into the mirror above the mantle. I saw her eyes shift around, saw her search for her own face. Her high-arched eyebrows gave her a permanent look of skepticism.

She came out of her room late one night, as I was going to bed. She was dressed in an elegant, black dress and was wearing the silver, teardrop pendant Pa had given her many Christmases ago. She had done her makeup clumsily, the blush was too heavy. She looked overheated.

“Who turned off the music?” she asked me.

Ma fidgeted with the pendant hanging from her neck. She stared at the wall opposite her bedroom door. “Where did the dancers go?”

“There aren’t any dancers, Ma. Do you know where you are?”

“Oh, yes.” She looked at me. “Yes, Simon, I am at home.” She went back into her bedroom and closed the door.

The night Ma ascended, I was making dinner. Simon was at a friend’s house. I had water boiling on the stove. I was about to dump the dry curls of pasta into the pot when I felt Ma behind me.

Ma shook her head. Tears streamed down her cheeks onto her dirty bathrobe. She put her dry, scabbed hands over her face. She turned and walked out of the kitchen, but not back toward her bedroom. I followed her, ignoring the angrily boiling water on the stove.

Ma rushed to the front door and flung it open, running until she got to the middle of the summer-dried lawn. Her back was to me until I drew closer. When she turned, I was surprised to see a soft look on her face. She stared through me.

“It’s you,” she said. Her voice was so far away. She wasn’t talking to me. She put her hand out, as though an invisible person might hold it.

She was standing on the brown grass, barefoot in her old robe. Then, as though caught by a hook, she was yanked silently upwards, high into the night sky, straight up, so high she disappeared and was gone. Reeled in. There was nothing I could do but watch her ascent.

Ma ascended three months ago. Simon withdrew into himself, stayed in his room with the door shut. My friends at community college avoided me. Everyone stared and whispered when I walked through the hallways to class. Everyday it got harder to concentrate.

Ma was always on my mind. We were watching a documentary in history class and I had settled back into my seat. The room was warm, and I let my eyelids droop. I dreamt of Ma and myself as fish. Ma had a hook in her lip and was being pulled violently upwards. I was shaken awake by a classmate before Ma broke the surface. My face was streaked with tears. I felt my neck for the gills that had been there seconds ago, then crammed my things into my bag and left.

The last time I went to school, I ran into my friend Daniel in the quad. Daniel’s already sharp jaw tightened when we saw me. Our proximity obligated him to greet me.

“Hey, Savannah,” he said. His thick, black eyebrows were furrowed in the center. He looked untrustworthy. He was thinking bad thoughts about me, sending them into the ether where they would knead themselves into reality and change the future. He was tormenting me.

“How is everything?” he asked, shuffling his feet. He was trying to infiltrate my thoughts, take the gold and spin it into straw, or something worse, like mud.

I hadn’t thought to bring my backpack, hadn’t been to class in over a week.

“Do you need help?” Daniel asked.

I shrugged and stared at my feet. I was also missing a sock. My bare foot felt clammy in my shoe. My skinny, unshaved ankle poked out from below the cuff of my jeans. I must have looked at my ankle for too long, because when I looked up, Daniel was gone.

I did not make sure Simon was going to school. His bedroom door was always closed. Food disappeared from the kitchen, so I knew he only came out when I was in my room.

I stopped leaving the house. I kept receiving calls from the school and my therapist, so I drowned my phone to keep from being stalked. Time moved like syrup. I glanced into the empty mirror and hours slipped away. I slept for days and only minutes went by.

I clung to furniture. I wrapped my fingers around my bed frame, desperately gripped the bathroom counter. A sconce on the wall, the edge of my desk, anything I could reach. It helped keep the fear at bay. I needed an anchor, something to secure me. I needed something to hold on to.

I awoke at all hours standing in the kitchen, Ma’s bedroom, the backyard. Just sleepwalking, I told myself, although I had never sleepwalked before.

One afternoon, I found myself at Simon’s bedroom door. There was a scratching, scrabbling noise coming from inside. The smell was sickening. I swung the door open and a rat scrambled into the hallway. The blinds in the room were open, letting slats of light shine in, but the rest of the room was dark and humid. All the furniture was pushed to one side. There were stacks of rotting dishes on the desk and the bed and more rats scurrying among them, gnawing on chicken bones and the crusts of peanut butter sandwiches. Simon was not there.

Most of the beige carpet had been torn up and nubs of white chalk littered the exposed cement, which had been scrawled on by an unsteady hand. I could only make out one word.

How long had it been since I had last seen Simon? Days or months?

It was difficult to get back to my bedroom. My legs were wobbly, and the hallway was miles long and so narrow. Thunder crashed outside. I could feel the rumbling in the foundation of the house. When I was finally back in my room, I opened the window. I wanted to hear the storm, but when I looked outside, there was no sign of rain.

I was laughing with a group of friends, old friends, friends I hadn’t seen for many years. I wasn’t sure where we were, but it didn’t matter. I didn’t think about it. One of them opened his mouth to speak. We were all laughing too loud to hear him. Everyone was breathing so hard.

The speaker turned to me and I saw his salt-and-pepper beard. His pinched brown eyes. It was Pa. His mouth drooped open and then I heard the words that tumbled out.

I looked around and everyone else was gone. Pa collapsed onto the floor in a heap. I rushed to his side, frantic to see his face, which had been hidden by his jacket. He was buried in this pile of clothes, he had to be here somewhere. I had to find him.

I pawed through the mound of clothing, knowing I was about to shove aside a shirt and see Pa. When I glanced up through the window, afternoon sunlight caressed me full on the face, beaming so hard. My hands were still buried in the dirty laundry that covered the floor. The clock said 2PM. I was on my hands and knees in the middle of my chaotic bedroom. I crawled back into my bed.

I lay. I lay. I lay, drowning in sleep and sweating until the sheets were drenched. The walls around me pulsed. The sky outside the window felt like velvet. My eyes were open all day. My skin was so bruised.

Someone was at my bedroom door.

It took me several days to get from the bed to the door. The knocking continued, coming through every wall. I could only move an inch at a time. A centimeter. A millimeter.

I was still in bed. I crossed the room in two big steps, from the bed to the door in seconds.

I opened the door.

It was Ma. She looked at me, her eyes shining buttery light. She didn’t collapse like Pa.

“I’ve missed you so much.” It took hours for me to form the words. They burned my tongue on the way out.

She took my hand. Hers felt so solid.

I felt a tug and then I was flying upwards, soaring through the ceiling like a phantom and up into the blurry night sky. The wind whipped my face as I was pulled higher. I thought only of Ma’s hand in mine. 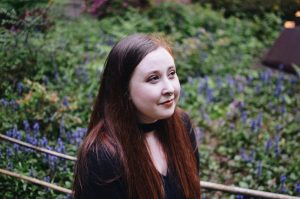 Delaney S. Saul is a writer living in Bellingham, Washington. She is a long-distance student in University of Southern Maine’s Stonecoast MFA program and is the new Editor-in-Chief of Stonecoast Review. Her work has been featured in Gone Lawn and The Molotov Cocktail. Her Twitter is @DelaneySSaul and her Instagram is @slimegrrl. 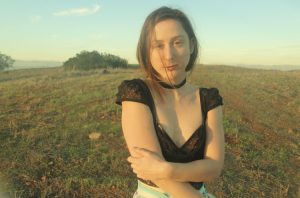 Hanna Webster is a photographer, writer, scientist, and self-proclaimed aesthetic curator. She graduated from Western a Washington University in 2018 with a degree in neuroscience and creative writing. She now works in a science lab, and as a freelance writer. She is a published author and lover of all things beautiful.