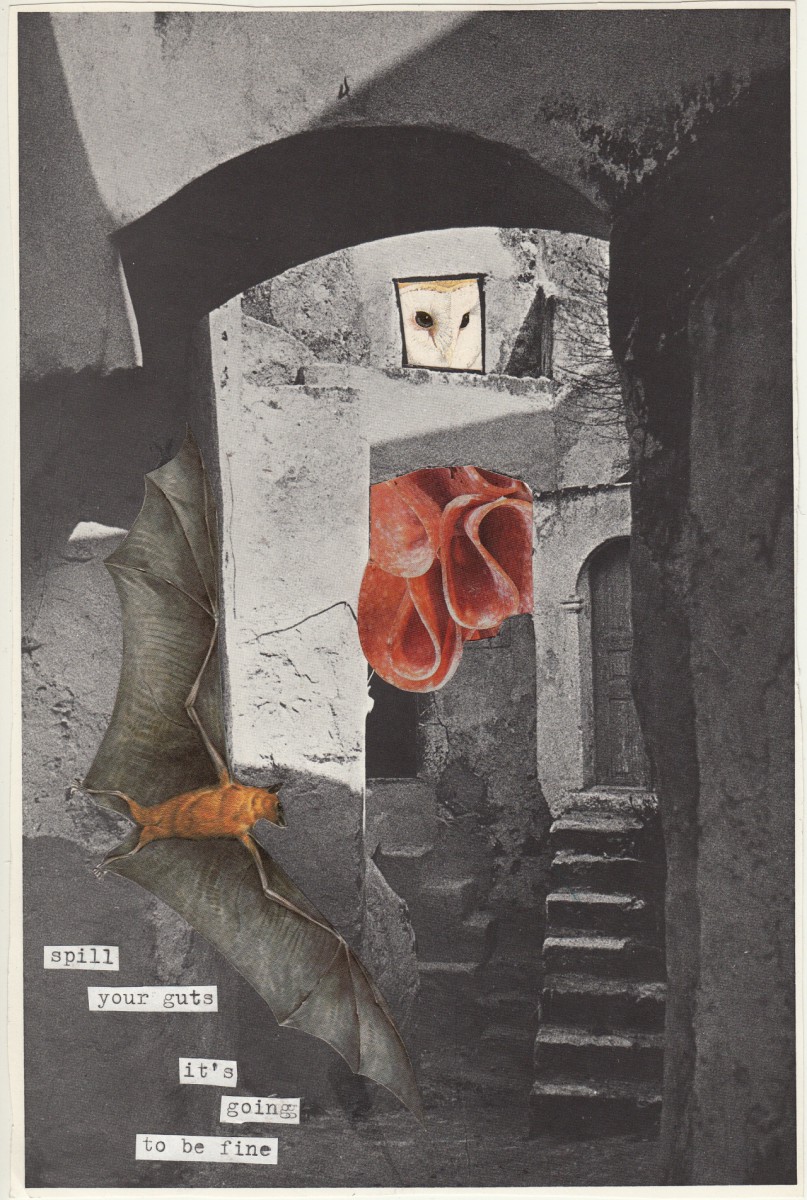 As you look at Emily, the hunk of slimy meat that used to be Emily, while she lies in her coffin, I understand if you want to speculate about what happened to her. We, as her family, would prefer if you didn’t. It’s upsetting to us. She was so young, don’t you see? Now she’s gone. She’s gone forever and all we’re left with is the memory of her broken, twisted body. When her parents look back on her, this, this right here is what they’ll remember. You want us to sit here, at her goddamned funeral, and talk about how she died? How dare you.

Well, I don’t want you to get it wrong. What do you mean, you heard she did this to herself? Look at her, does this look like something she would do to herself? Do you think she ripped off strips of her own flesh herself? Look at her; she used to be so pretty. Now she’s just a hunk of meat. Bloody, and raw, and exposed for the entire world to see, to see what’s inside, what she would hide if she had the chance. She did this to herself, you say. Bullshit.

Hey, wait! I don’t want you talking to her father. It’s too raw. I mean, look at her. What do you mean, “Where’s Amy?” I’ve never met the bitch, but I swear if I could get my hands on her… She’s not here. She never showed up.

Fine, okay, you want to hear the truth about what happened to Emily? She told me this, okay? She cried, she died over this. You want the truth? This is what happened. Amy is a monster.

They met in a grocery store, just like your typical romantic comedy. Amy Edison was a yoga instructor at the YMCA, while Emily, our beautiful Emily Wright, had never done yoga a day in her life. They were just shopping, and Emily – you know how she was, such a klutz – she knocked over this display of beans and Amy helped her clean them up. They got to talking, you know how cute girls are, and Amy went on this passionate rant about yoga. She was talking about whether or not it was right to do secular yoga, you know how some people get about religion, and Emily was just so in awe of this person.

Nothing more than just friends. To Emily, Amy was this pillar. She was appealing and beautiful, but she was too tall for Emily. Not tall literally, but untouchable. She thought Amy was too much of everything. Romance never even occurred to her.

In the first year of her friendship with Amy, Emily dated a few girls, a few guys, and was single for a while. She jumped from relationship to relationship. She couldn’t find anyone to hold her attention for a long amount of time. She loved to use dating as a way to get out of the house, to socialize with new people, to keep herself sane with human interaction – but she didn’t think anything of the dates. The dates were just fleeting interests that went nowhere. During this time, this year of bliss, she focused on school work. She didn’t know what she wanted with her life, but she did know that she enjoyed school, so she focused on that. She won scholarships, she was featured in the newspaper, and she made the dean’s list. She flourished in academia, she flourished in casual relationships (platonic and romantic), and she flourished physically. This year made her understand why everyone talked about college being the best time of someone’s life.

Her realization that she was in love with Amy marked the end of the year of bliss.

She told herself it was fine. She could do it; she could be in love with her best friend, but not make it known. Everything would be fine. She knew, she just knew, that it had to be one-sided. So she thought nothing of it. It was probably just a crush, she couldn’t be in love with this girl that had grown to mean so much to her, it had always been platonic – why wasn’t it still platonic? Her plan was as follows: she was going to continue to date and ignore her feelings, thus she would get over Amy and everything would go back to normal.

To start out everything was fine. Emily would leave her offerings in the form of hugs. Would hold services in the form of movie nights. She would speak compliments like prayers. Her love would be left in text messages and tiny gestures. Peeled off like dead skin and left on the altar of the kitchen table. She would clip off wistful sighs like fingernails and leave them on the ground, casual and for anyone to find. Her adoration left in Amy’s hair brush, sitting on the bathroom sink. She would complement, and gush, fix, and help, and love love love love love.

Speaking later she would claim that Amy didn’t realize what she was doing. She would defend her love until her death. But Amy knew, she had to have known.

Amy would hoard her offerings. She would covet the hugs, would lord over every service, and would demand the prayers daily. She would await text messages, demand them, need them like she needed air. She would never text back, never reciprocate. She would collect Emily’s skin, would save it, would cherish it. Collect the fingernail-sighs. Run the adoration through her own hair until she absorbed it all. She would hoard hoard hoard all of it, everything Emily would give her, and Emily would just give more, without ever expecting anything back.

We didn’t realize what was going on. She had told us, many times, that her feelings were platonic. There was nothing romantic going on between Amy and Emily. We noticed that she kept her nails shorter than ever. We even noticed the bald spots in her once thick hair. That her skin had patches, dried and dead and so rough. We just didn’t realize these things, these necessary things, were something Amy was taking from her. We thought they were friends. Normal friends.

But there was a time when things got better. Her nails were long, her hair was thick, her skin was so soft. She looked beautiful. She looked radiant. She smiled more, she laughed more, and her very love of life returned. The tiny parts of herself she surrendered were enough to shed her tentative love. Amy had them, Amy could have them, that was fine. Emily moved on. She had convinced herself that Amy, beautiful funny Amy, was just a friend. Emily remembered this time fondly, she remembered it as the time when Amy was her best friend. Truly, without conflict, her best friend. She remembers it as the time she temporarily got over Amy.

Amy remembers it as the time Emily pulled away from her. She felt as if she were losing her best friend, because to her that was all Emily had been. Changing the relationship status did nothing to benefit Amy, not like it did for Emily. Amy needed Emily to tell her she was pretty, to kiss her on the cheek, to hug her. She didn’t understand why Emily wasn’t giving her what she needed. I’ll allow that her actions weren’t on purpose, she didn’t try to seduce Emily, she just didn’t recognize that the former relationship came out of a romantic, instead of platonic, love.

So she started giving. She emulated what she wanted Emily to give her. She hugged her, touched her, focused only on her. It was as if the sun was shining only for Emily and Emily fell hard.

Amy went from hoarding tokens of affection to ripping out full chunks of Emily’s skin. She would carve it out in long strips and gobble it up like a delicacy. The blood would trickle down her chin and Emily would offer to lick it back up. Amy would take pliers and rip out Emily’s fingernails as she yelled and screamed to

Her once black as night hair started to dull started to gray started to fall out in heaps and heaps of love and adoration.

She was left panting and needing and was so thrown off that she loved Amy more than when she started.

Amy pulled away at this point. She saw that Emily was in love with her. Saw that Emily would do anything for her. Which was great, but she didn’t want to be obligated to love Emily back. Because she didn’t. So she pulled away, said

I’m sorry, but we’ve been spending too much time together, we need to cut back some

That left Emily. She was lost, afraid, and so in love that it was honestly killing her. She was a hunk of blood and meat, bleeding and yearning and needing. Ripping out hunks of flesh until she had none left yelling

Amy never picked them up. They piled up, to be discarded and avoided.

When Emily got over Amy there was nothing left of her. Just a hunk of blood and guts nobody could ever love. That’s how we found her. She bled out waiting for her friend to come back. It wasn’t even that she needed the girl she loved; she needed the girl she trusted. She died, skinless, heartless, and alone. And now we have all of these people here to see her dead body, the girl who gave everything everything to her lover, only to die. Asking me, her goddamned aunt, what happened to her? How did this happen? People who don’t even know her are sitting here judging her, judging us. How could we let that happen? How dare you? You didn’t even know her.

What do you mean you knew her? Wait, what did you say your name was? Amy? That’s funny. Amy what?

Kelsey Kimbler graduated from Miami University of Ohio in 2015 with a BA in Creative Writing. She now works as a journalist at her hometown newspaper. When she is not writing, she can be found tending to her lovebirds and obsessing over her dogs. Her fiction has previously appeared in Eunoia Review and Happy Captive Magazine. kimblerwriting.com

Jane Flett is an over-excitable pervert with a penchant for ridiculous metaphors and glitter. She’s won various awards, including Salt’s Best British Poetry (2012) and Wigleaf’s Top 50 (Very) Short Fictions (2014), but she’s still waiting to be presented with her honorary tiara and tankard of gin. When Jane’s not writing, she likes to play cello with Ambika in the riot grrl band Razor Cunts, teach creative writing courses through The Reader Berlin, run festivals, host queer events, and rollerskate down Tempelhof runways in hotpants.
janeflett.com