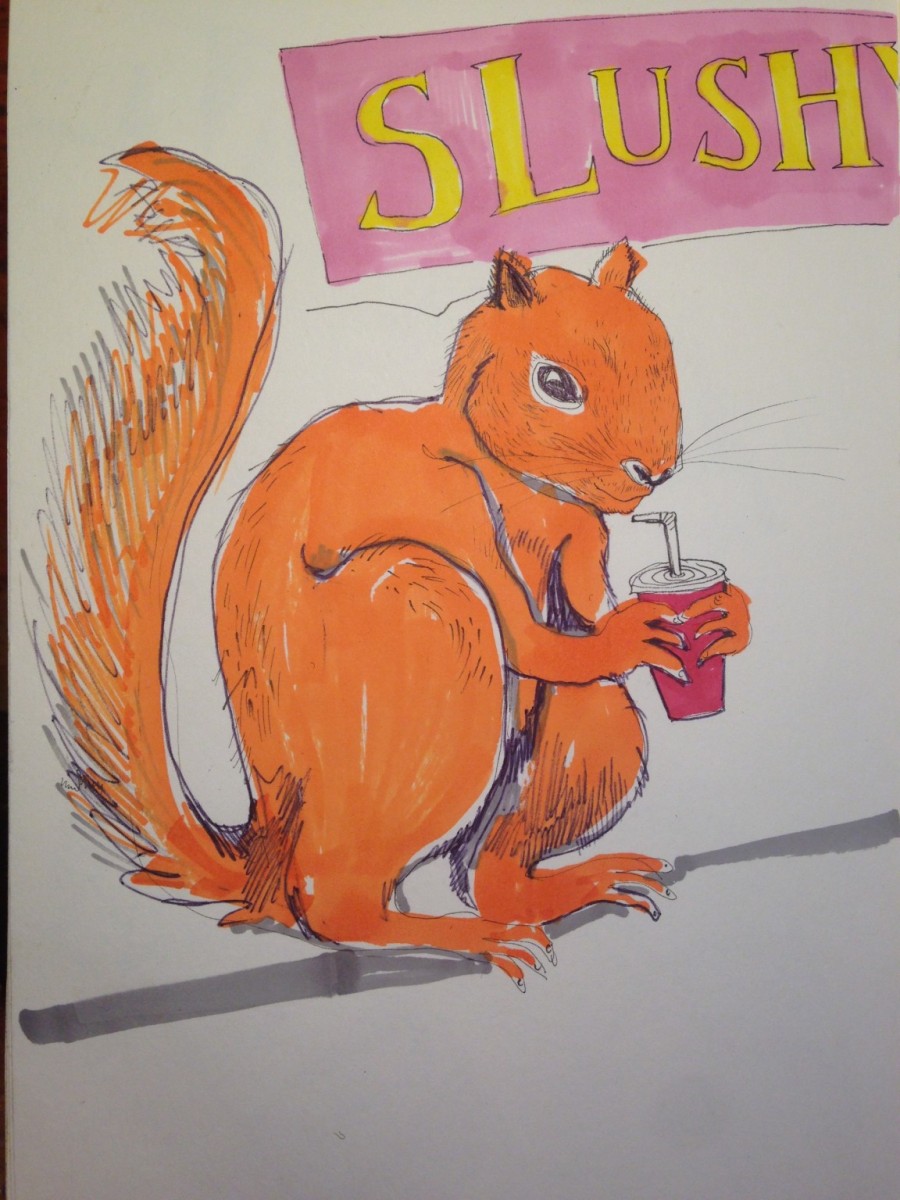 Melinda could already taste the delicious red cherry slushy on her tongue – already feel the cool crushed ice running down her throat. She had been craving it all day. The sun beat down, hot on her face. Literally beating me, she thought. Looking up at the fiery mass, Melinda imagined golden fists coming down and bashing her in the face, burning her cheeks. Her maroon tights stuck to her sweaty thighs, her flowery yellow dress clung to her stomach and chest. The shade of the trees that lined the narrow road offered no comfort.

Melinda was forced to pause from her zombie-like walk when a black squirrel darted in front of her, an acorn wedged between its teeth. Horrible timing, Melinda thought as a white van sped down the street and knocked the squirrel dead. Another, smaller car slowly crept up and even more slowly swerved around the squirrel. Melinda looked down either side of the street and cautiously made her way toward the deceased rodent.

“You poor thing. What was your name?” She knelt next to it. Its eyes bulged from its head, but the acorn remained securely held in its tiny mouth.

“Are you a boy or a girl? I’d rather not assume either one. I’ll give you a unisex name. How about Blackberry?”

Blackberry’s eyelids sagged. You look sleepy, she thought, and now you’re sleeping forever. A small squeaking noise caught Melinda by surprise. She turned to see a brown squirrel standing next to her.

“What are you doing here?” she asked. It, of course, didn’t answer. “Do you know your name, or do I need to make one up for you too?” Her face contorted in concentration. “Can I call you Rush?”

“Rush it is, then!” Melinda checked her watch. 6:30 P.M. glowed brightly in red numerals. “I’m sorry sweet thing, but I have to go home now. It’s later than I thought.”

She stood up and the squirrel darted off. She licked her chapped lips, disappointed she had missed her chance to get that slushy. She began her short walk home through the apartment complex. At dinner, Melinda discussed the strange incident with her mother and father. It was difficult to focus, however, with her father’s round belly bulging over the table and red wine staining his unkempt gray beard. With every shaky sip more sloshed out, sometimes onto his hairy chest. His eyes and cheeks were red. Like a stoned Santa Claus. Except Santa would be wearing a shirt.

Her mother had long unwashed brown hair. The same color as Melinda, but streaked with grays. Her breasts hung freely in a tattered beige tank top, her chest wrinkled and red from years of tanning on the lawn. Her thighs were thick and soft, outlined by bright-purple spandex. Her fork trembled with every bite of food she brought to her lips.

“You shoulda picked him up and we coulda eaten him for dinner!” her father laughed loudly, spraying steak across the table.

Her mother joined in, slapping her father hard across the back in a fit of hilarity. “No, really! Squirrel’s my favorite! Especially with some salt sprinkled on top!”

“And suck on their tails!”

“And I love the crunching sound the spine makes when you bite it in half!”

They were practically in tears now.

Melinda cut into her steak. Blood oozed onto the plate.

“May I be excused?” she asked, politely.

The next day, Melinda took the same path towards the gas station–with the same high hopes for a slushy. The sun seemed even hotter today. If it had a face, it would be laughing at her pain. The dead squirrel, Blackberry, was still there. She made her way toward it and knelt down next to it. Flies buzzed around Blackberry’s head, and it was beginning to smell. The acorn had fallen out of its mouth and now lie next to it. A brown squirrel ran up and stood next to Blackberry.

The squirrel stood on its hind legs in approval.

Another squirrel appeared next to Rush. This one was white.

“I’m going to assume it’s safe to say I have to name you too?” She thought for a moment. “How about Elixir?” she asked sweetly.

The white squirrel squeaked in approval.

“What a lovely pair of friends, Rush and Elixir. But poor Blackberry. I am sorry for your loss.”

Melinda wiped the sweat from her forehead and pushed her copper-brown hair out of her face.

“I have to go. I really want a slushy.” She stood and began to walk away. The two squirrels appeared as though they would follow, but soon ran back to the trees.

A bell chimed as Melinda walked into the tiny gas station.

“Hello, Ken,” she said with a warm smile.

“Your name tag clued me in, in case you’re surprised. Which by your reaction I’m assuming you are.”
His pale cheeks went pink. “Oh,” he said. His smile had faded.

“Do you still have cherry slushy’s?” she asked.

“Thats the only kind we have.”
With great joy she grabbed a large plastic cup and filled it with the red slosh.

She placed the slushy on the counter and pulled a crinkled dollar from her pocket.

“Will this be all for you today?” Ken asked, reaching for the dollar.

“Yes!” she said with enthusiasm. “I’ve been craving this all week!”

“Then a penny is your change, miss.” He popped open the cash register and carefully laid the dollar on top of the others. He picked up a penny and dropped it on the counter. The penny spun for a moment before falling heads-down.

“That’s not good!” she exclaimed, crossing her arms.

“Face down pennies are very bad luck. I’m sorry Ken, but you’ll have to keep this one for yourself.”
Melinda grabbed her slushy, spun around on her heel and went to walk out of the store, but stopped.

“Actually,” she slowly turned back around to face the clerk, “Can you please give me a plastic bag?”
Once back in her neighborhood, Melinda again knelt next to the dead squirrel. She grabbed the plastic bag and put it over her hand. Wrapping her covered fingers around Blackberry, she tried to peel it off the asphalt. It wouldn’t move. The intense heat acted like a super adhesive between the squirrel and the road. Melinda pulled harder, but it wouldn’t budge. Elixir and Rush took their places in front of her.

“Hello there,” she said, still struggling to peal the rotting animal from the road.
His head popped up, but his body still lay stuck.

“Almost there,” she said now working on the tail.
Elixir squeaked, followed by Rush.

“What?” Melinda reached for her slushy, pursed her lips around the straw, and took a nice, long sip. The cold, crushed ice felt amazing sliding down her throat.

The squirrels squeaked again, this time in unison.

Melinda ignored them, savoring her drink.

A car horn blared loudly behind her. She whipped around, the drink still in her hand and the straw still in her mouth. A white van came barreling down the road. It hit the girl head-on, sending her flying across the street. Elixir and Rush quickly scampered over to her now-limp body. Cherry red slushy was strewn across her face and clothes; her eyes were half shut and her arms and legs were contorted. One leg was bent backwards with a bone popping out of her knee. Yet despite all that, the straw was still held securely in her mouth.

“What was her name?” Elixir asked Rush.

“I have no idea, she never told us,” Rush said.

“Suppose we should give the poor thing an identity.”

“Let’s name it Bits,” Rush said, examining the body. A puddle of blood oozed from under her head.

“It’s difficult to tell the sexes of these things,” Rush responded.

“She never had a chance.”

Emily Boswell lives in Grand Rapids, Michigan with her husband and two pet rats. She graduated last year with her B.A in Writing from Grand Valley State University. She is currently making the best subs in town, saving up money until she can attend an MFA program in fiction. Someday she hopes to become a professor and teach creative writing. This is her fist publication outside of high school, and college journals.

Isabel Rock: Born under a lucky star in a field of lavender, Isabel Rock spends her days drawing magical pictures to spread smiles in the world.
isabelrock.blogspot.de
instagram.com/isabelrockartist/