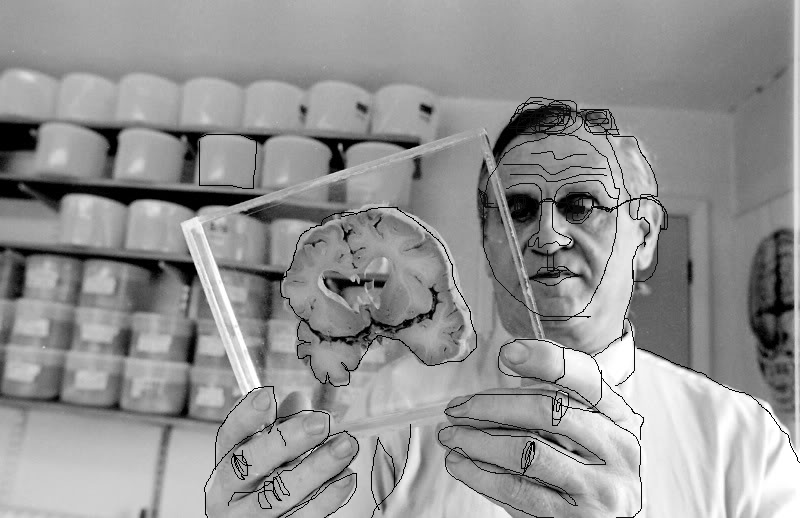 ‘Is that right?’ The guard asked, implying it definitely wasn’t. ‘Well then why am I here? I’m going to have to ask you to leave or stay awake, I’m afraid. It’s unsafe and weird for you to sleep in here.’

I sighed and glanced over at Ted Daniel’s enlarged hippocampus, engorged by a lifetime of driving taxis, put on my hat (straw with a nice wide brim) and, with a generous nod at the guard, made my way into the night.

Only it wasn’t night. The sun had just come up and was shining with that bright intensity that a fresh morning sun does, burning through all the crap of yesterday.

‘Christ,’ I said, and made for the train.

As I rolled around the city on one of the first trains of the day, the day shaping itself around me, I had this feeling again that if I didn’t focus properly on my bodily functions, they would not go: my heart would stop, my breathing cease etc. I think I had been working on brains too much recently.

A man with a small child sat next to me so I farted quickly and he moved away. I closed my eyes and considered riding the train until the end just to get a bit of shut eye. I was going through one of those phases wherein my bed was the last place I was able to sleep, where it represented the struggle to sleep rather than sleep and my brain, like a pet or a child, had to be tricked into sleeping by setting up camp somewhere unlikely, like a train. But logistically this was not going to work. So when it came to my stop a few minutes later, I shuffled off, looking like a tired elastic band, my movements bendy and unpredictable, and made my way home under the barren morning light.

Once there, I climbed two of the stairs then sat on the third and rested my head against the wall until I finally fell asleep. I remember the sensation of squirming under someone’s gaze – God’s?

I was awoken some hours later by a series of tepid and unrythmic knocks.

Jelly. I knew it was her because only she calls me Mel which is not my real name, it’s just short for ‘melancholy’.

I sprang up (never being one for over-done morning movements) and opened the door. Sure enough, there stood the gangly substance, gleaming in the sun and looking at absolutely nothing.

‘Hello, Jelly. Wait there, I’ll just be a moment.’

It was as if I hadn’t said a thing, she just waited pleasantly like a phone in sleep mode. I quickly changed my shirt from a grey one to a less grey one, filled my bumbag with a few more coins and hurried out of the door.

I hopped on my bicycle and she clambered onto the back, wrapping her long arms around me, which caused me to involuntarily shudder.

Twenty minutes later, we found ourselves outside the Brutalist structure that was the brain bank. Our brain bank. A sign on the fence advertised its imminent closure and transformation into luxury flats. The dead, interesting brains to be replaced by living, boring ones. We cycled around the side of the building to the bike shed. Jelly desperately needed a wee so I dropped her off and gave her my keys (she was never allocated her own set for safety reasons) and told her to let me in once she was done.

I locked my bicycle up and waited. And waited. Until almost half an hour had gone by. I decided to walk around to reception, praying that someone was there and that they would let me in. I rang the buzzer. No answer. I rang it again, for longer. Finally the jobsworth security guard turned up and gave me a real hard time about it before letting me in.

Hurrying towards the lab, down the laminate corridors, all fallopian and shiny, I became aware of a low, emulsifying sound. I stopped at a door to my right and peered through the gridded window pane. An intern (I assume: from behind I gathered he was young by his slouch and unkempt hair) was loading a standard kitchen top blender with bits of brain, puréeing it, then dumping the contents in the bio-waste bin. It took a while for me to move my legs, but when I did I ran as fast as a cheetah to the lab. I found Jelly sitting there, fiddling with a brain. Through my panting, I told her she had forgotten about me.

‘You forgot about me.’

I looked into her tiny pea eyes. Sometimes I forgot how sensitive she was underneath that creepily blank façade. But I quickly shook the thought.

‘We need to work quickly.’

I took down a few buckets from the shelves. They were filled with troubled minds. I took Felicity Phelp’s brain out of its bucket. Like all brains, it was deceptively heavy. She was a dancer and the spatial part of her brain was huge. She would be one of the first to go if they got their hands on her: No paperwork. No history. No identity. Storage costs money. A long view costs money. So we were told to delete her.

But we just couldn’t: we’d spent too much time with them. I looked at Jelly. She was gazing at her reflection in the mirror above the sink and shaving her head with a pair of clippers. I stopped unloading the brains.

I tailed off but she knew what I meant and said:

‘Better me than you.’

I sighed and resumed the brain piling. ‘Look at me: clinging to my self-hood like the most debased coward.’

‘I don’t think you’re a coward,’ she said, dreamily. ‘You’ve just forgotten your place in the universe. And the more you forget,’ she said glancing in the mirror for patches she’d missed, ‘the less you want to become one with it. That’s why it’s better me than you: you’re not ready.’

We were silent for a while.

Jelly nodded, sheared the last clump of web-like hair, and climbed onto the countertop with perfect ease.

There are several different types of brain surgery. The type used depends on the problem being treated. A craniotomy, for example, involves an incision into the scalp and a hole in the skull, known as a bone flap. The hole and incision are made near the area of the brain being treated.

During open brain surgery, your surgeon may opt to:
remove tumors
clip off an aneurysm
drain blood or fluid from an infection
remove abnormal brain tissue

As I would not be doing any of this, the nature of the job involved… improvising. So, after sawing through her skull with a circular saw – cutting through the subjective experience of consciousness that arises from the objective tissue – I emptied her head and began stuffing it with as many of the other brains as possible. We would carry the past with us or die trying.

Sharifa Petersen Tadini Rybolt is a writer and artist working in London and living in her head. When she isn’t making overpriced cheese sandwiches for the people of Deptford, she’s writing a novel for her MA in Creative Writing, reading books, drawing pictures and laughing at stuff. Her best friends are David Foster Wallace, Mervyn Peake, Jorge Luis Borges, Samuel Beckett, Djuna Barnes, Rene Magritte, Peter Cooke, Madonna, and a tiny starfish with only one high-heel that lives at the Tate.