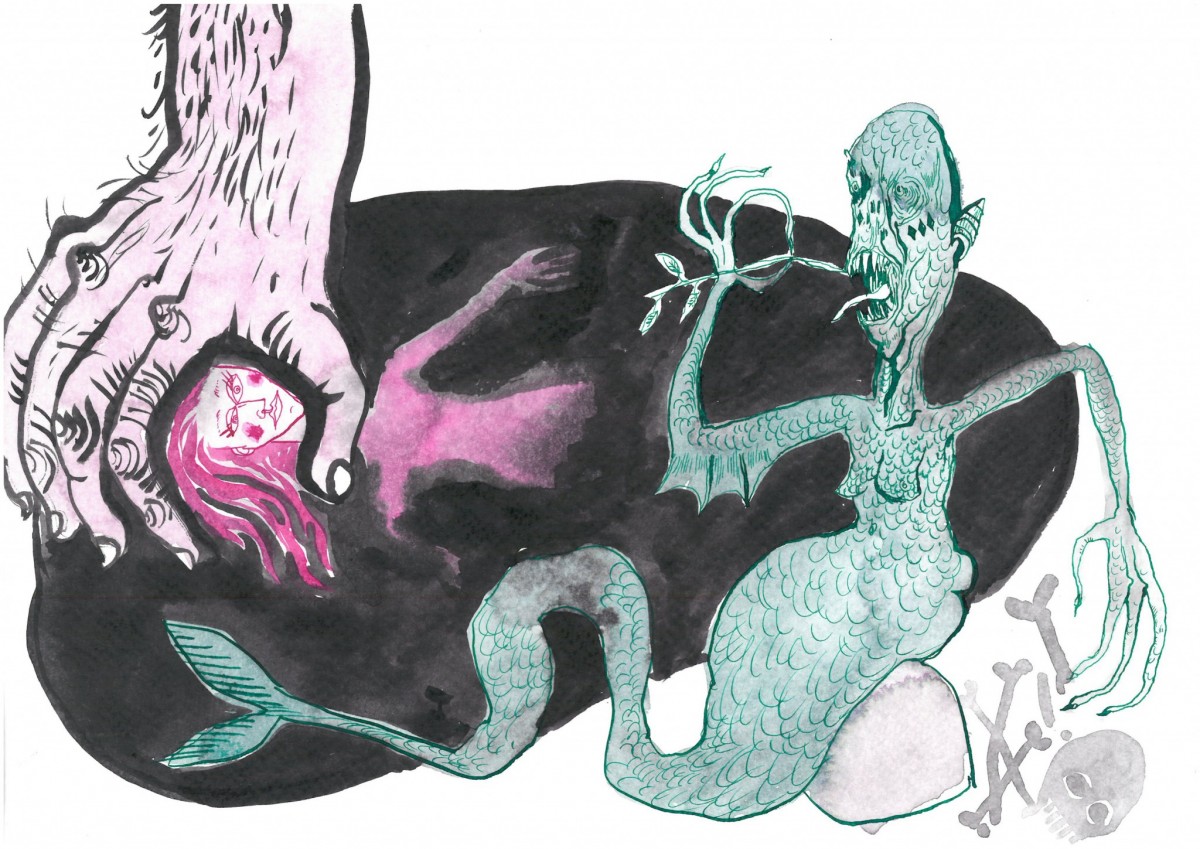 The siren sits on a gray rock in the middle of the Wailing Lake cleaning her teeth. Her scaly blue-gray pointer finger twirls a section of coontail against her thumb. She lifts her hand, and her fingers work the forked leaves of the plant between her snow white fangs. The creature uses the tip of her tongue to catch some leftover pieces of pink flesh. She licks her full lips, and then closes them, creating a smacking sound as saliva and flesh separate and meet.

She glances at the mangled corpse beside her. His face remains intact and grotesquely ghoulish in its pale rigidity. Not much else remains of the man. The siren scoffs. He didn’t put up much of a fight, letting her literally devour him while he was still breathing. She shakes her head. It’s more fun when there’s a struggle. With one swift shove, the siren sends the human carcass into the lake so his bones can be added to her building materials.

Once he’s out of sight, she gazes down at the black water, checking her fangs for stray meat. Satisfied they’re clear, she tosses the coontail over her shoulder into the lake. Then she gazes at her reflection, smiling. In the grin, the siren sees a flicker of her former self. Her human self. Before she can stop her mind the reflection below her transforms, showing the siren as a young maiden on the day of her death. This reflection is the moment before her head was forced past the lake’s mutable surface. This was the last time she saw herself alive.

The siren watches her death, experiencing it like an echo. It’s both separate from and a part of her. When her head was thrust into the lake by an all too familiar hand, her lips squeezed together as though they’d just been sewn shut. Her nostrils tried to reject the water, to push it far away, but within seconds her nose was filled. The water was salty and ice cold, stinging her skin and chilling her bones.

The maiden whipped her head back and forth in an attempt to break her father’s grip on the back of her neck, but all it did was create a pillow of ebony tendrils that suffocated her faster. Her small chest began to heave as the air in her windpipe evaporated. Survive, she told herself. Survive. She went to thrash her head again, but felt a sharp whack on the top of her skull. His elbow had collided with her head. Everything vibrated within and outside her. She knew this was the end.

In her last moments of consciousness, the girl tried to keep her eyes open, desperately wanting to take in the world one last time. She watched the algae and small fish darting around her, and saw the cerulean skeletons of the girls who came before her. She was not the first girl to end up in this situation, and she wouldn’t be the last.

The siren slaps the water with her palm to remove the murderous vignette. The force creates small waves that lick the rock she sits upon. Her execution was many moons ago, and in a different life. She is no longer the girl who was drowned for her promiscuity. She has literally slipped into another skin, having shed her human self of Celia. She is now the undead sorceress, the Siren of the Wailing Lake.

Her once petite figure now stands at ten feet tall. Her soft pale pink skin has been replaced by tiny blue-green scales. Above her elbows are dorsal fins the same color. An inch below her navel, the small blue scales change to large gray ones so dark they almost appear as black as the lake’s water. These slate scales make up her fin. The fish-like tail is five feet in length, and with one flick of it, the siren can transform the lake into a whirlpool.

Her ears are no longer small and round, but instead are long and pointed, resembling those of elves. Along each angular cheekbone are three diamond-shaped gills. The siren’s eyes are small and round, and an electric shade of yellow. Her nose is long and so thin it doesn’t look like she can breathe through it. She no longer has thick ebony hair down her back; in fact, she has no hair on her body. Every inch of her ten feet is covered in scales.

The siren certainly doesn’t resemble anything human anymore, yet this monstrous figure isn’t why the people of Limnol fear her. In truth, they don’t know what she looks like; no one but the siren knows her true form. What the people of the nearest village fear is the siren’s witchcraft. You see, the Siren of the Wailing Lake is a shapeshifter, and changes her appearance to fit the desires of the men who wander to her lake. She uses this illusion to lure them into the water and to their deaths.

While the people of Limnol are well aware of her trickery and appetite for male flesh, many continue to venture to the lake. Men can’t help but test the limits of their mortality. And the siren is delighted to show them just how human they are.

Because no matter how hard she tries she cannot forget her human life. She cannot erase her drowning, or the moment her village cast her out, or when, at the age of 15, she discovered she was with child, knowing her fate was sealed. Limnol has no tolerance for women who fornicate. The villagers believe young women who perform this atrocity have been touched by the Devil himself. They believe this kind of corruption will devour their small town. And so the fathers take their nefarious daughters and drown them in the onyx water of the lake. It is said the Wailing Lake is black from all of the evil souls trapped within its marshy borders.

Every child in Limnol is warned to stay away from the lake. The parents of the village tell their sons to avoid the lake and any woman by it at all costs. They say, There’s pure evil there, and the vile witch who inhabits the water can take on any form, even the most beautiful and sweet, and such a vision will lure you to your doom. To the daughters of the village, the parents say, Keep your virtue at all costs. Without it, you will become a shapeshifting monster, damning this village.

The siren remembers being told this as a child. She was terrified by the possibility she would disappoint her parents and become a witch. The memory makes the vertical vein between her amber eyes twitch. She wonders if her parents ever think about her. Does her mother weep in her memory? Does her father feel penitence for what he did to her? Does he think about Celia’s midnight hair wrapping around her face and throat, quickening her suffocation, as he held her under the water? Does he remember the muted gasps and croaks from her throat as she fought for breath? For life?

She hopes that her father is haunted by the filicide. Yet she knows he is probably proud, believing he protected his family and home from the Devil. The siren promises herself she will find a way to lure him to the lake to have her revenge. She lifts her hand to her face, feeling her razor sharp cheekbones, her gills, her Elf ears. She wonders what creature her father will see before him when he meets his end. Will it be the siren’s past form, the pale pink skin, the ebony hair, and full red lips of young Celia? Her hand drops to her chest. She cackles with the thought of such a perfect climax to their story.

Her ears prick up at the sound of leaves crunching nearby. She pushes her lips closed, cutting off the sound of her sinister laugh. Her nostrils widen as she catches the first whiff of her next meal–youth, sweat, and a hint of pine. She cheeks press into a grin.

With one swift motion, the siren slides her body down the gray rock, and disappears in the black water of the Wailing Lake. Her arms by her hips, she moves with gentle yet powerful flicks of her tail, her dorsal fins propelling her forward. The siren nears the shore. She can hear the man getting closer. She moves slowly out of the water, emerging as a beautiful young woman with golden locks flowing past her slender hips. She wears a pale pink satin gown. Her bare feet peek out from underneath the fabric. Even though she just rose from the lake, she is perfectly dry. She bats her eyes a few times and a coy smile spreads across her face. She is ready for him.

The man appears from behind the brush. His eyes grow wide with enchantment when he beholds her. Her smile widens. She waits for him to approach her, knowing he will. He is already captivated by her. In a few short minutes, she’ll be gnawing on his sweet flesh.

As he walks towards the siren, she thinks about the stories spun about her–that she’s evil and a minion of the Devil–and she giggles. The man thinks this is charming, that this maiden is shy. Men are so foolish, a few eyelash flutters and a smile renders them powerless. The siren finds the control she has over these fragile creatures intoxicating. Maybe that makes her evil. Maybe she is, in fact, a minion of the Devil. Either way, she prides herself on living up to these tales. The people of Limnol need something truly magnificent to fear. So the siren will continue to catch and eat any man who comes near. She has crowned herself the Queen of the Wailing Lake, and plans to build the kingdom she desires with the bones of the murderous men, the deadly daddies, of Limnol. She won’t stop until she has all of them, including her very own father. Her latest victim is now inches from her. “Hello,” he says and bows his head as customary when addressing maidens.

In the sugary voice of a damsel, the siren says, “Hello.”

Christina Rosso is a writer, educator, and dog mom living in South Philadelphia. She has a MFA in Creative Writing and Master’s in English from Arcadia University. Currently, she is an adjunct English professor at La Salle University and Penn State Abington. Her work has been featured in Supposed Crimes, Twisted Sister Lit Mag, Across the Margin, and Zeroflash. Find her on Twitter @Rosso_Christina.

ISABEL ROCK: Born under a lucky star in a field of lavender, Isabel Rock spends her days drawing magical pictures to spread smiles in the world.
isabelrock.blogspot.deinstagram.com/isabelrockartist/
isabelrock.co.uk