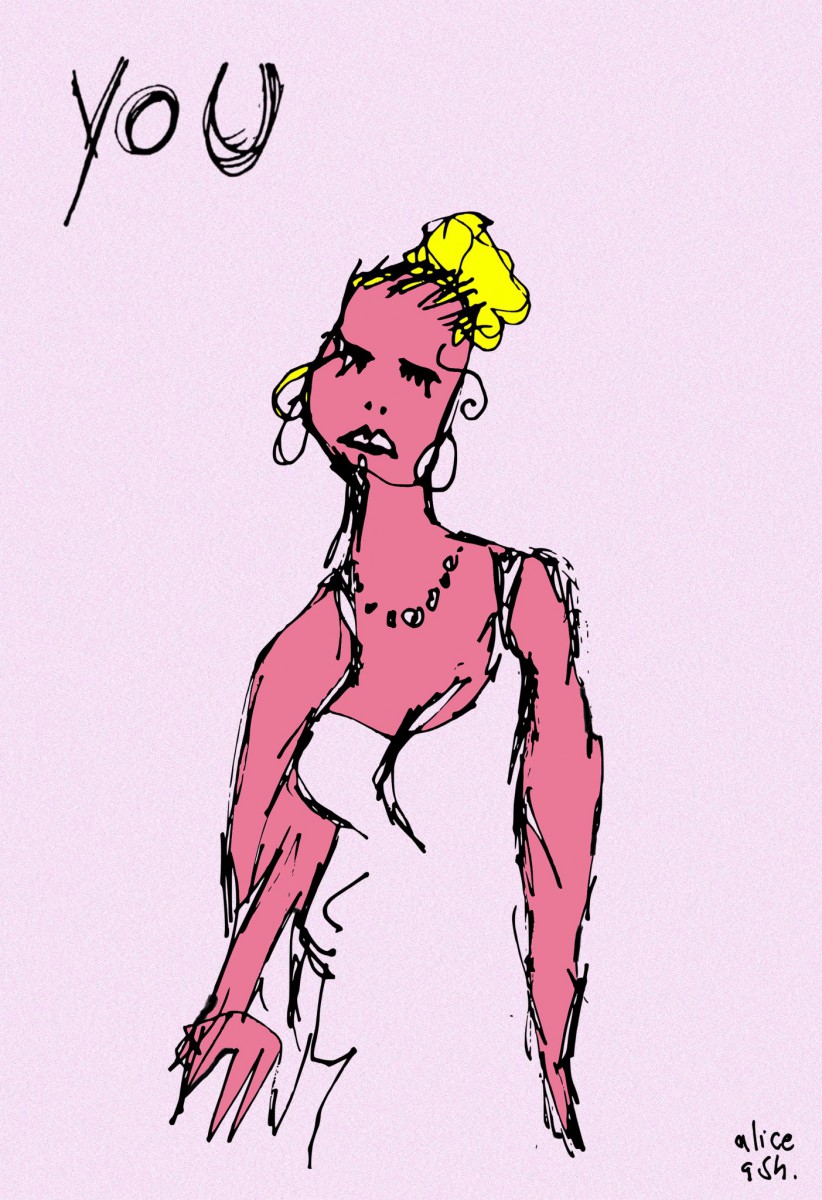 Once I was out at the club in a dress that was designed to make boys/guys/men feel really hot under the collar and really hard inside their pants.

It was not the kind of dress I would have usually worn, but I had just recently broken up with my boyfriend of five years and two months. He had left me for another woman, and so I wore the dress.

I thought that I looked good and I felt powerful, and when I walked in my high heels it was as though I didn’t care anymore.

So I went into the club and then I saw you, but after a few seconds you started to talk to someone with extremely large breasts, and I realised that it probably wasn’t you at all, but that I was yet to find you. And then I saw that there were many you’s in the club, and I thought, Jesus Christ! Who needs a relationship! And I began to weave my wicked spell on all the men on the dance floor.

After an hour or so my friend patted me on the back while I was sick in the toilet. She said that my dress really suited me, and that she thought I had lost weight.

She also said that she had always been jealous of my relationship with my mother. We talked about her relationship with her mother for thirty or forty minutes, and then I realised that there was no time to find you before the lights came on in the club, and I made her come back out of the toilets and into the club and dance to Rihanna, even though she was crying. She was crying and singing at the same time and also dancing in a very weird way.

I looked at some girls who were wearing big clothes where only a tiny bit of their bodies showed like their wrists or sometimes their bellies. The girls were surrounded by men, and they danced very well. I tried to dance like them, and I pulled down my dress and a man said, ‘put it away love!’

He was the first man that spoke to me all night, and even though he was rude and had orange hair, I thought he might be you.

In the taxi queue my friend told me to shut up. I told her to shut up back, but I knew that she was jealous because I was talking to a man.

‘Did yous have a good one?’ the man said.

He had a nice jacket and carried a blue plastic bag.

‘You wanna come back to mine? We can split the taxi fare.’

The man didn’t look at me.

The man looked at all the other women at the bus stop. My friend looked green, like she was going to be sick.

I laughed a bit.

I thought that he looked very disappointed, and I said, ‘I’ll give you my phone number though.’

He shrugged and looked away.

I realised that he certainly could be you, and that a chance like this probably wouldn’t come round again for a long while.

My friend was very tired and moaned and said, ‘Don’t.’

But I did, and when we got in the taxi he huddled up inside of his big jacket and didn’t say anything, so I said my address in the space where he should have said his. My place was fairly close anyway.

He didn’t say anything else the whole rest of the journey either, even though I started several conversations, and I ended up talking to the taxi driver, who I started to realise might be you instead.

I almost asked the taxi driver for his phone number and said, ‘Can I get a receipt,’ but in a low voice as if to say, ‘Can I have your phone number?’ And while he was writing it out I held my breath and then ran into the house to turn on all the lights and see if he had written his phone number on the bottom.

The man sat on my sofa and took three cans of Strongbow out of his blue plastic bag and still wouldn’t really make any conversation, so I just put on the radio really loudly.

Later, when I took off my white dress he tried to get an erection, but he couldn’t.

I realised that he wasn’t you.

Alice Ash is a writer, filmmaker and collaborator. She is currently working on her first collection, Paradise Block and her second short film, The Woman. Aliceis the co-creator of Femmeuary, a collaborative feminist blog and co-directed the short film Doctor Sharpe.
www.aliceash.com
www.facebook.com/aliceashofficial