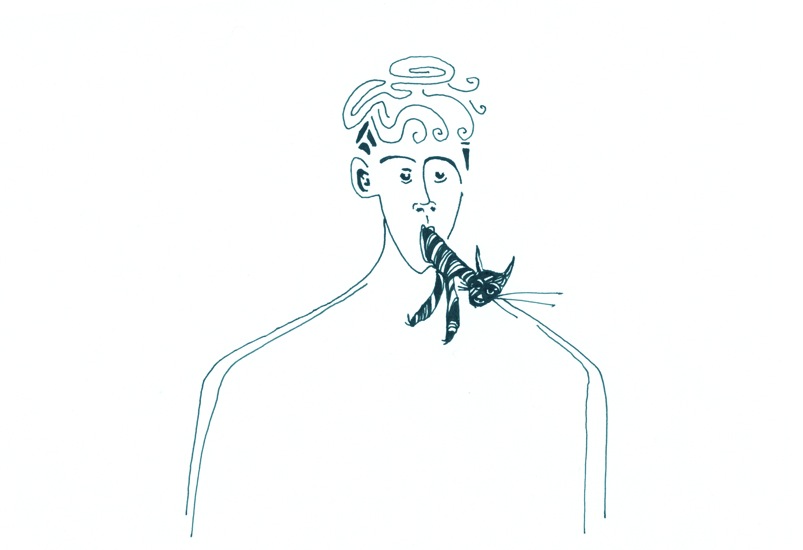 Last night I silently ate my neighbour’s cat in the backyard. It tasted of struggle, and its muscles were tense from loneliness.

When I was sitting in the backyard while I was eating, the windows looked down on me and the elevators on the main walls sang.

The blossom of a daisy opened, and the lawn laughed.

After eating it, the cat lay in my stomach like guilt.

It stayed there for the next 20 years, a burden drawing me downwards, just above my shame.

The inhabitants of my house were happy, and I knew I had done something good for them.

The lonely people in the stuffed flats around now had an outlet for their grief and their prejudices.

Until I moved out, they were thankful and gave me little treats for not letting the cat die.

The cat was healthy. When I didn’t give the neighbours’ treats to it, it finally got thinner.

When i moved out, the cat jumped out of my throat into the backyard and stayed there.

It watched me, when I left with the moving van until I had disappeared behind the houses. The cat as well as the windows stared after me, and the elevators on the main walls sang a sad song.

Marie Luise Lehner, 1995
Winner of “Kolik” award, newspaper award of “Die Oberösterreichischen Nachrichten” and honourable mentioned multiple times in context of “Sprichcode” award for young authors.
Participated in the Austrian days of the audioplay, with the short piece “Womit wir schlafen, oder wir ficken einen Staat” (With whom we sleep, or we fuck a state). Directed a couple of audio- and theatre plays in Vienna and Linz. Published in several anthologies, such as the annual book of Literature in Linz “2014 Facetten” ed. Brigitte Schwens Harrant, in “Kolik Zeitschrift für Literatur” (Austrian journal for literature) ed. Gustav Ernst, and in the publication “Die Türen des Tages” as part of the “Sprichcode” award for young authors, ed. Leo Kieslinger.
She studies creative writing at the University of Applied Arts Vienna.