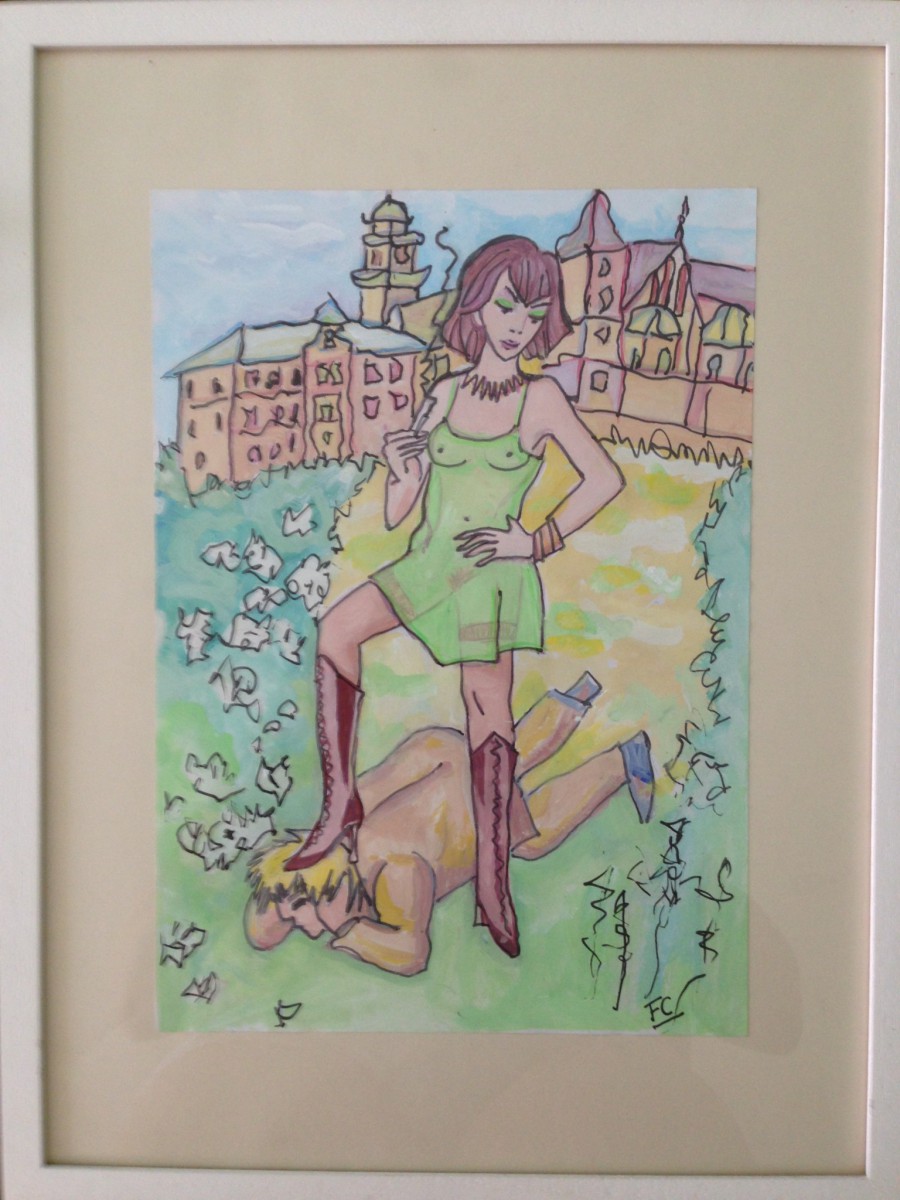 Uh! I’m exhausted. My feet hurt. Off with the tight shoes. They didn’t use to pinch so much. Have my feet grown?

“Minette, Minette, where are you?”

Where’s my clever kitten? God! I look so ludicrous with this hat on. Black doesn’t suit me. Makes me look old and drab. Next week I’m going to the hairdresser’s and getting a new perm – and perhaps a new colour. I can’t stand this lilac hair anymore. What about blonde?

She’s probably in the garden. I’m starving. Where’ve I put my slippers? How can someone be so scatterbrained? They’re not here either. What the heck? I’ll go barefoot then. Whew! These tiles are pretty cold. Well, I’ll just put his on. No! Too big and ugly. My stomach is growling so strangely. But I’m not going to cook. No way! I’m way too tired from all that crying. Besides, I just don’t want to. A piece of sausage, a piece of camembert, an apple, and voilà. A nip of wine for the blood flow. I could even put coffee on, but no, I’m too lazy, and if I stay too long in the kitchen then I miss the Pierre Lux Variety show. Yes, my dear, this show is silly, but still I like it. Beautiful old chansons, nice interviews. You just never understood anything about music.

The church was so full, incredible! The pastor came to me afterwards and said he’d never seen it so crowded before, not even for Christmas mass. And I wept again: I bet when my time comes, not even the half of them will show up. But like I give a damn… He knew so many people! No wonder when you spent your entire life in the pub.

“Oh, Minette, here you are… Where’ve you been at? Oh, and now you want something to eat. Come here, I’ll give you a slice of sausage. And yes, come, jump on my lap! You’re surprised that I’m allowing it while I eat! Yes, you may… This is new: you’re allowed. Come over! No reason to pull threads out of my dress. Those wicked claws! I prefer your little velvet paws.”

But actually I don’t care. I have no intention of ever wearing this dress again. This black is so abominable. I simply have no interest in looking like a scarecrow for months on end just because the old scoundrel bid farewell.

Ah, there she is, this little singer from Alsace. What’s her name again? Yes, she has a very pretty voice. She knows how to sing love songs. Love songs, la la la… Where have all our loves gone? And after the show I’ll watch a movie and go to bed really, really late.

Et voilà, I’ve forgotten again to take my pills against forgetfulness. Tomorrow I’ll make a knot in my napkin! Details I forget, but not the important events. And the little everyday evils I remember exactly. To a tee!

I wonder if I should sleep down here on the sofa tonight. I can’t stand my bed anymore. Our bed, sorry, dear! Maybe I should sell it. What would the neighbours say? Oh, what do I care what the neighbours think? A good wooden bed frame is probably worth quite a bit. Then I can buy a cheap folding bed and get back pain. Isn’t life complicated! But also beautiful. I’m glad that it’s over. It all went so perfectly. My wreath was so chic! But as of next week plastic flowers. I don’t intend to spend the rest of my life in the cemetery.

“Shoo! Shoo! Minette! Make way! I have to open the sofa. Oh God! How did he do it? Somewhere there used to be a lever! But it’s gone! The heck with it! I’ll just lie like this. I’ll just get my pillow and my plaid throw; I won’t be cold… The nights are quite pleasant. Poor Gaston that you had to go belly up in August! You’ll miss the beautiful autumn! No chanterelles! No escargots!”

I could lie down, but then I have to get up again when the film is over. Or I’ll just leave the TV on. What’s on tonight? Where’s the TV guide hiding?

Oh, I’ll just go to the bathroom and then take another look for it.

Why must so much food always get stuck in my dentures: how annoying! What will I do with this razor? Well, I can use it for my legs. But all this aftershave and stuff? I’ll throw it away. Mmmmh… I do love this cold cream though! I’m going to smear a thick layer on my face, then tomorrow all my wrinkles will be gone! This is going to be stressful when I walk through the village and they all come up to me with mournful faces, grab my hands and express their condolences. If only they knew! Before, yes I used to love Gaston. But that was a long time ago. He was handsome and shy. Anyways, there weren’t a lot of options back then.

Not that I’m about to go look for someone new. Absolutely not! I only want to do what suits me. And no one should come between me and that. They always told me what I have to do and who I should be, first my parents and then Gaston. Enough! End of story!

The TV guide is gone. It wasn’t in the bathroom either. It’s not so bad. I’ll lie down and flip through the channels! Do you see that, Gaston? I’m channel-surfing! You really couldn’t stand it when your grandchildren did that.

“You find a program and stay there.”

“Minette! Turn off the TV! Are you lazy! Well, then I’ll get up again!”

Oh my God! I forgot to close the shutters. Everyone can peek in here first thing in the morning. The neighbours will see me on the sofa in my nightgown and wonder.

Oh! How can I be so tired! No wonder! It’s actually quite complicated, such a funeral! And extremely expensive. In the future I’ll have to be a bit careful with money. Yes, Gaston, you didn’t drink it all away! Well, you were only really drunk at weddings, baptisms and communions. But an apéritif here and two three beers there; that leaves a hole in your wallet.

I wonder if it was the alcohol that always put you in such a bad mood, or more precisely, made you so moody. In a good mood with others, in a bad mood with me. Always something to complain about, never satisfied. And you can’t say that I didn’t try. My main concern was always is Gaston okay, is he happy? So I asked you several times a day, “How are you, darling? Everything alright?” You had no better answer than, “How should I be doing?” (Grumble, grumble). And if you looked really angry, “Is something wrong, darling? Did I say something wrong?” That would throw you into a rage.

But you hardly ever spoke. You would have liked it if we’d lived in complete silence. The radio got on your nerves, my chitchat got on your nerves. Well, now you have it, your silence! If I want to chatter, I’ll chatter: and if it’s silly stuff, all the better! “The serious side of life.” Pffff! With your friends you weren’t serious. They thought you were funny! You, funny! Inconceivable!

You never wanted to go on vacation. We only went to the movies once a year and you always fell asleep. The cat wasn’t allowed in our bed. You’d have rather had a hunting dog. The grandchildren made too much noise. The garden was overgrown. I only talked nonsense with the neighbour. Holding hands was too childish. I bought too many new clothes. The soup was too salty. You didn’t want to spend hours in the supermarket; you didn’t care whether we had cookies or biscuits, whether we had sausage or ham. You never wanted to go to the senior center. Why I would sing in the choir when my voice sounded like a cat getting its tail slammed in the door. The minute someone lit a cigarette you’d made an uproar, even though you smoked like a chimney in the house for thirty years. You made fun of my appearance, claiming old women weren’t appetizing. And what about old men? You were so proud of your paunch, rubbing it constantly. For decades you maimed me with your beard. You knocked me up without asking for my opinion. (Nothing against the kids!) You never cared about their schoolwork. If one of them had a good report card, then it was your kid. When the marks were bad then it was suddenly mine. You forbade them from inviting their friends over. You wanted nothing but your peace, your peace, your rest. Now you have it!

And if I hadn’t helped you a little bit then you probably would have waited much longer. So say thank you to your Rose, Gaston, my darling.

Françoise Cactus (born Van Hove) is a french author, musician and illustrator who has been living in Berlin since the 1980s, and who’s probably best known for being one half of the band Stereo Total. She’s written several shorts stories and radio plays, draws a lot of ladies being lovely, and once crocheted a life-size doll, “Wollita”, that made the German tabloids get their knickers in a knot. Her books include: Auobigophonie (Martin Schmitz Verlag), Abenteuer einer Provinzblume (Rowohlt), Zitterparties (Rowohlt), Neurosen zum Valentinstag (Rowohlt), and Wollita. Vom Wollknäuel zum Superstar, co-authored with Wolfgang Müller (Martin Schmitz Verlag).

Translated into english by Ambika Thompson